Public as of yesterday, Abey Charrón, a Puerto Rican artist, has expressed taking issue with the use of his San Juan mural in rapper Rafa Pabön’s latest video, “Sin Aire,” released June 6. Proceeds from the clip are slated to be donated to an anti-racism foundation, Pabön tweeted yesterday afternoon. Still, he writes, Charrón is asking for $12,000. 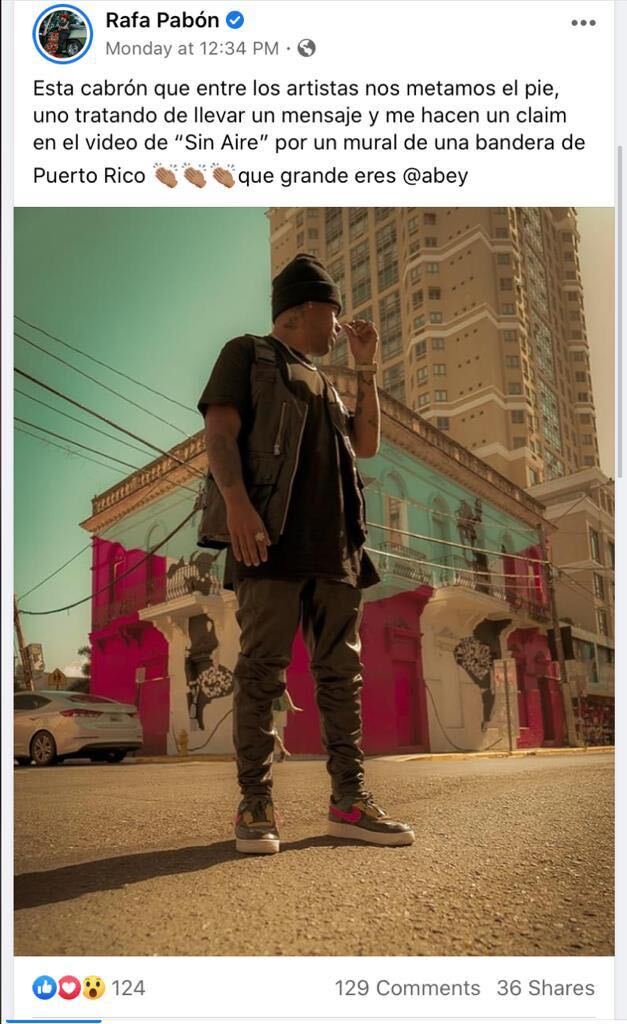 A reworking of the Puerto Rican flag, Charrón’s piece, “Loíza Brinca,” wraps a corner building on Calle Loíza in the neighborhood of Santurce.

In “Sin Aire,” as Rafa Pabön alludes to the killing of George Floyd, pressed to the floor with a foot on his neck during an anti-racism freestyle, Charrón’s work is seen in the background in bits and pieces. Later scenes, especially at the video’s finale, show his design more completely.

He never gave permission for the mural to be featured in the video, Charrón wrote on Facebook. As such, its use in the clip constitutes a violation of the author’s rights, he says, noting that the 2017 work is copyrighted.

This is apparently Charrón’s first situation of this kind: “Anyone that knows me knows I’ve been working 20 years as an artist…and I’ve never had a situation like this, thanks to the respect and ethics [between artists],” he writes.

He’s been called racist and people have pointed to white privilege, his adds, in response to his claims against Pabön. Abey says that “Pabön has publicized false expressions out of context about me, indicating that I’ve made a claim to take down the video.”

“I’ve never asked him to take down the video,” he notes, adding that he wants to come to an agreement that “recognizes the work of each of them.”

The amount of the compensation desired ($12,000), by the way, wasn’t his idea. Yesterday, guesting on local radio station La Mega 106.9, Charrón says the amount was decided by lawyers.

He questions where the proceeds from Pabön’s video are actually going. Whatever foundation Pabön chooses—so far, he hasn’t revealed details—should be “del patio” (as in, a Puerto Rican foundation). And if that were the case, Charrón implied, he’d drop the claim.

“As of now, [Pabön] hasn’t called me to apologize,” Charrón says.