On 4/20, Mexican trapero Alemán dropped the follow up album to 2019’s stoner classic Humo en la Trampa. The next day, he ran into the brutal reality of marijuana in Mexico. On Tuesday, the trapero was pulled over by the police in Huixquilucan, a town in the Estado de México on the southwestern edge of Mexico City.

Cops found his grinder, which Alemán later posted on his Instagram account contained five grams of cannabis, the legal amount of the drug you are allowed to have in your possession.

But as any Mexican cannabis consumer could have predicted, the cops didn’t care about legal technicalities. Alemán says the police initially demanded 25 thousand pesos (roughly $1000 USD) of mordida in exchange for letting him go free. 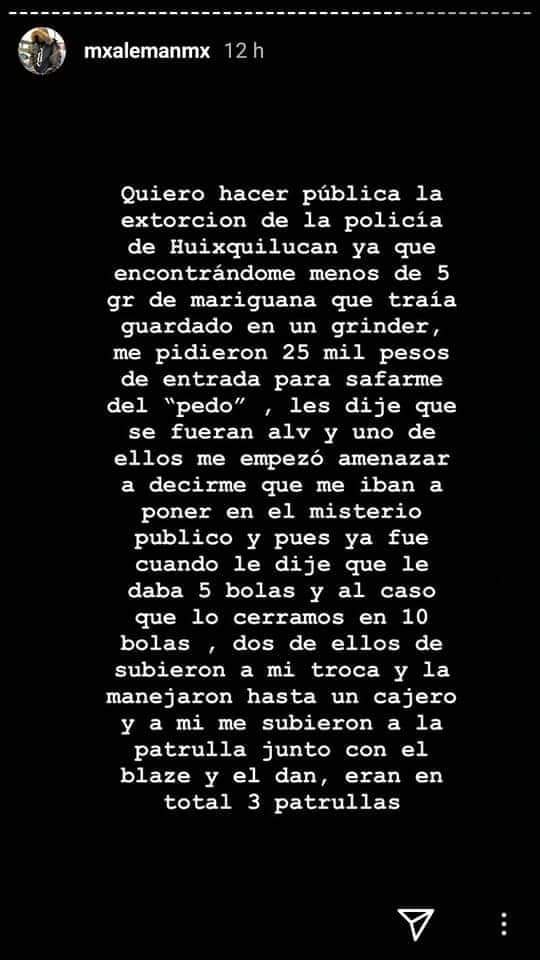 Mexican cannabis consumers say that such police extortion is common, and point to it as a key reason for the country’s Senate to legalize personal consumption and cultivation. The Mexican Supreme Court recognized both as a constitutional right in 2018, but tasked legislators with creating the regulation that would officially make them legal. That process has dragged, and the Supreme Court recently granted the Senate a second Covid-related deadline extension until December 15th.

Alemán’s situation gives you a good idea of why Mexican cannabis consumers don’t want to wait.

“I told them to go to hell and one of them began to threaten that they were going to take me to the attorney general,” posted the rapper on IG. “That’s when I told them I’d give them five thousand [pesos], and we agreed on ten thousand (roughly $400 USD) … They got into my truck and drove it to an ATM. They put me in the police car with Blaze and Dan. In total there were three police cars.”

After the incident, the rapper realized the police had stolen his Gucci money belt and Versace sunglasses and gone through the rest of his belongings, including his passport.

“I immediately started following them, but I couldn’t find them and I decided to go back to the place where they’d stopped me, their traffic stop de ratas, and I told them to give me my things back.”

The police declined, and instead started threatening the rapper again, putting him back in the back of a cop car and repeating their threat to take him to the attorney general. Alemán says they eventually gave him back his ID documents, but not his other items.

The rapper told his following on social media that such incidents would keep happening as long as prohibition continues in Mexico, and even tagged President Andrés Manuel López Obrador, calling him “hijo de tu p*ta madre.”

Though many voted for AMLO in 2018 with the hope he would legalize marijuana, the president has proven to be reluctant to do so, even blaming drugs for Mexico’s record-breaking murder rates at a press conference on the day his Morena Party opened debates on a plan to regulate cannabis in the Senate.