Reggaeton Pioneers The Noise Coming Together for Rare Reunion Show
Search
Music 03.07.18 at 11:09 am

Red Bull Music Festival is back again, this time touting a lineup of events all over New York that includes musician and activist Harry Belafonte discussing his career and dedication to civil rights and feminist skate crew Brujas hosting their third annual Anti-Prom. Plus, our perennial favorites Uproot Andy and Riobamba will take audiences through a deep dive of Latin American and the Caribbean sounds at a live edition of their Bien Buena show, and Puerto Rican-Irish rapper Wiki will perform in tandem with the opening of the largest RAMMΣLLZΣΣ survey to date, taking place at the Red Bull Arts New York space.

Of special note is a rare reunion show with Puerto Rico’s The Noise, the influential collective founded in the early 90s in San Juan. The collective of rappers, DJs, and producers, which included titans like DJ Nelson, DJ Negro, and Ivy Queen, went on to pioneer the sound of reggaeton on the international stage. Plus, the past and future of reggaeton will meet with Rosa Pistola, Riobamba, and DJ Lobo supporting the lineup.

Here are a few of the events we’re putting on our calendars:

May 3: If This Knowledge Scares You, The Equation Is Working

This showcase of NYC musicians inspired by artist and MC RAMMΣLLZΣΣ includes rapper Wiki and producer Sporting Life, Show Me the Body, and more.

To celebrate the early days of reggaeton, the festival is reuniting the genre’s early trailblazers The Noise, who came together in San Juan in the early 1990s. The set will also include DJ Lobo, Rosa Pistola, and Riobamba.

This year, Red Bull Music Festival New York partners with Brujas, the Bronx-bred collective of radical feminist activists and skaters, known for raising awareness and resources for queer and trans people of color. They’re hosting their third annual Anti-Prom, a fashion and dance event that has become a tradition and safe space for non-binary gender expression.

Tickets for Red Bull Music Festival go on sale at the Red Bull website on March 22 at 10 a.m. EST. Check out the full lineup of programming below. 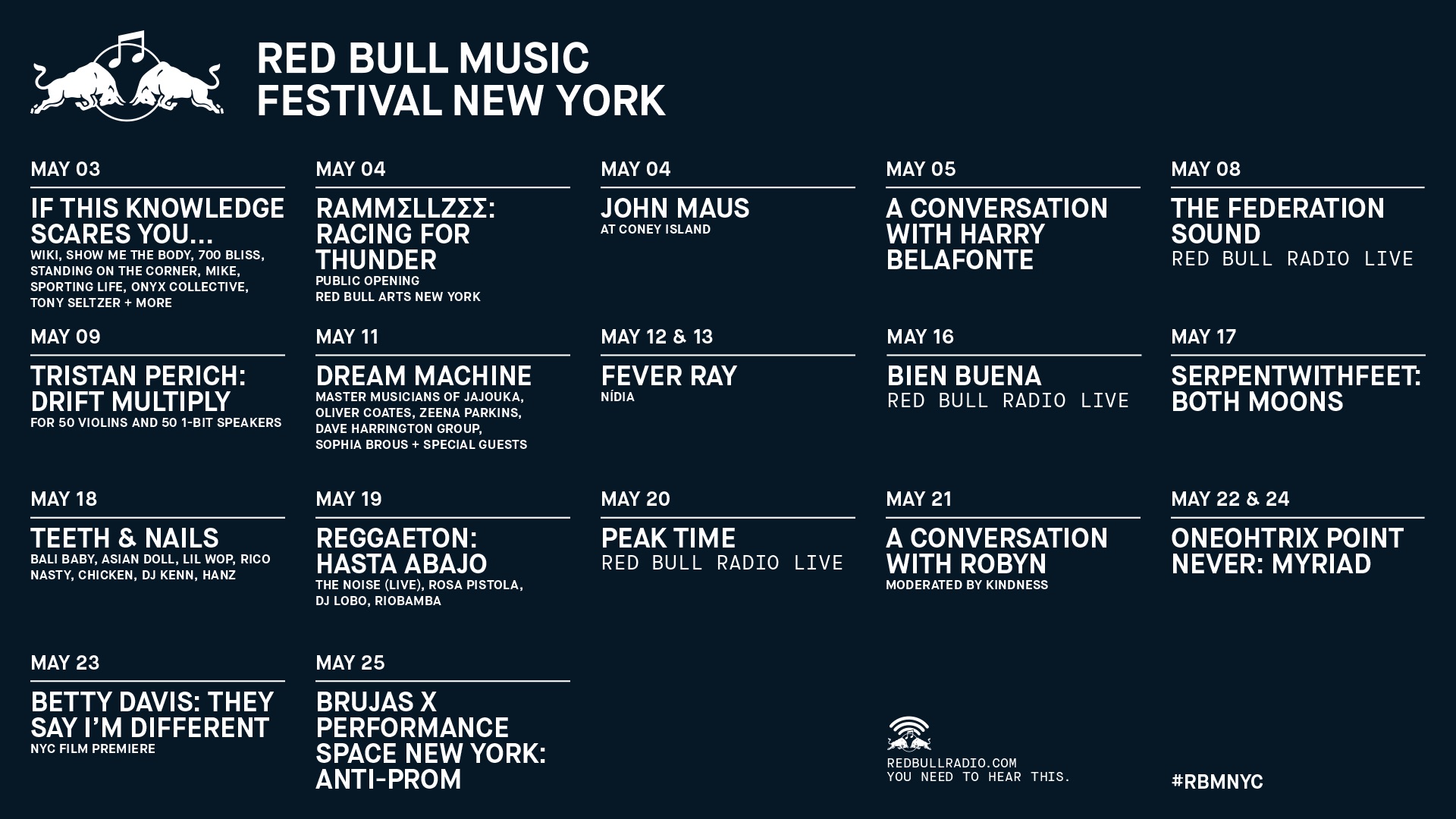