It’s that time of year: La Reina de Tejano birthday is just a few days away. Tributes abound worldwide, and any commemoration of Selena is inherently warm and overflowing with love. New York’s Selena Por Siempre, a party now in its third year, highlights something especially incredible about her legacy: more than 20 years later, Selena continues to be an incredibly unifying force.

Her music and her messages crossed the confines styles and genres, and as midnight strikes on Saturday, a truly special celebration of that will be already underway. With two successful runs already down, the event has reached a new peak in showcasing Selena’s far-reaching influence.

Amor Prohibido, the Selena punk tribute band helmed by Shomi Noise, is a new addition, and Ecuadorian queer feminist poet Sonia Guiñansaca was just recently added. That’s on top of a bill that already includes Chicana drag queen and LGBTQ+ advocate Lady Quesa’Dilla and Boricua pop balladeer Ana Isabelle, both on board for a second time. All of these artists and performers perpetually carry a torch for Selena — and in featuring all of them on a single bill, their own fans are connected by a common bond.

“I’m just so excited about how people are coming together, like all the people who grew up with her as an icon, as a role model, as a star and everything that she was. Coming together to remember that, and also create that community and keep her legacy alive out here in New York,” says founding organizer DJ Chela.

Alongside DJ Bembona, Chela will be spinning Selena’s favorite tunes, from new jack swing to R&B to disco, as well as her original favorites and remixes. And while each are renowned in their own right, there’s a guest of honor in the mix that brings the party full circle. Principe Q, one half of Royal Highness and Selena’s nephew, is coming in from Houston.

For Chela, that’s not only an honor, but his invented sound — dubbed screwmbia — represents an integral part of the evolution of the genre, from “techno cumbia” to the ways in which Selena weaved in elements of the genre she loved on other songs. Principe Q, Chela says, has continued that.

“I see that happening again now, in our generation, with digi-cumbia and tropical bass…So to me it’s all these sounds that really honor the folkloric rhythm, the original rhythms, that are so powerful, and translates them to this generation that also loves those drum patterns and those turn-up syncopations that really reach us,” she says.

Selena Por Siempre also boasts nail and makeup sessions, and a costume contest — homages to her iconic style are necessary ingredients, of course. But Chela rightly points out that Selena’s life struck a chord with so many, from the economic strife her family endured as a result of Reaganomics to, as a woman, blasting through Tejano’s male-dominated universe.

“There’s just so many real-life issues that are connected to her story, and we want to highlight all the people that can help tell those stories and bring us all together. We all deserve that, it’s like she deserves to be honored in that way, and it’s such a beautiful thing. It just brings people so much joy to remember her,” Chela says. “She lives on in the way we remember her, and the way we remember the joy that she embodied and that she brought to the world, and her kindness and her generosity, and her beauty and talent. When we come together and remember that, it makes us everyone happier and, we all deserve that, you know? And she definitely deserves that.”

Selena Por Siempre NYC III goes down on Saturday, April 15 at Manhattan’s DROM. Peep the flyer below. For more info and to purchase tickets, click here. 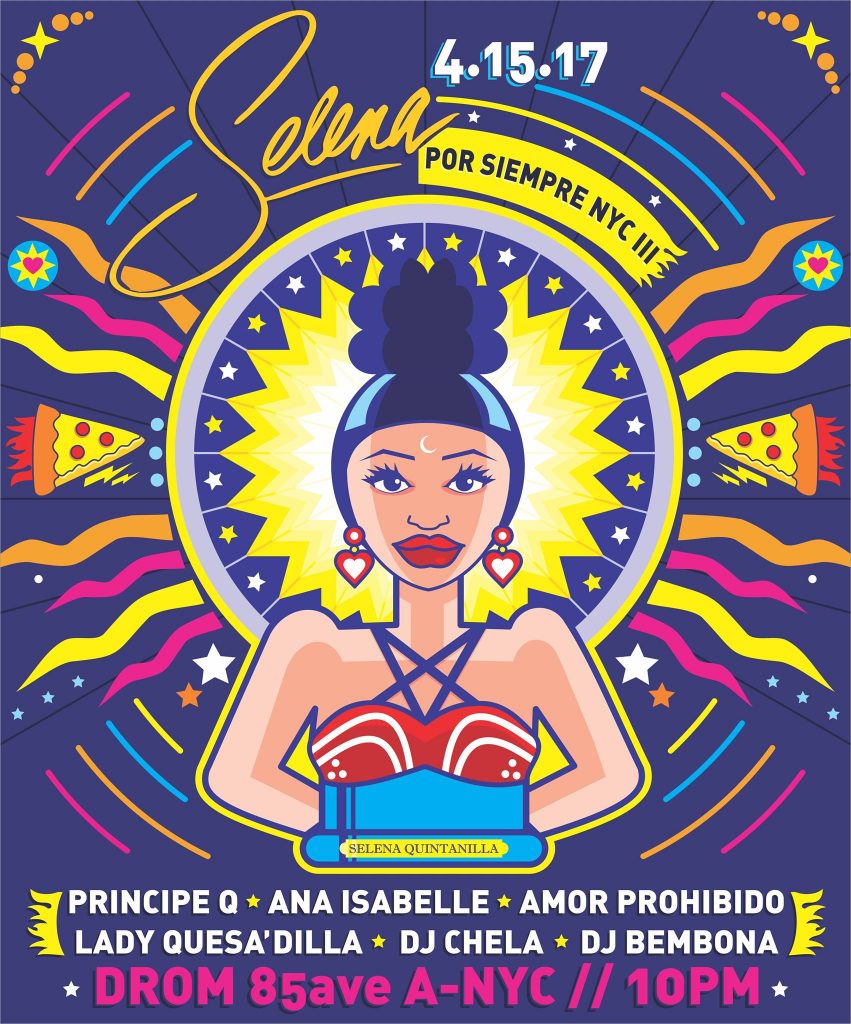