There are plenty of reasons to love Snow Tha Product. She’s a beast on the mic, literally rapping at light-years per second without missing a single syllable. She’s earned the respect of rap veteran Tech N9ne. She’s proud of her culture. She keeps it 100% real.

Snow is active on social media and often responds to her fans, especially the 797k followers she has on Facebook. That’s why when Mr. Ortiz commented, “She’s Mexican? But she bomb,” on one of her pictures, she had to respond. “What u mean she Mexican BUT bomb.. I’m dope cuz I AM Mexican,” wrote the rapper, born Claudia Feliciano. Then she proceeded to drop the mic or, in her case, victoriously emoji dance her way out. 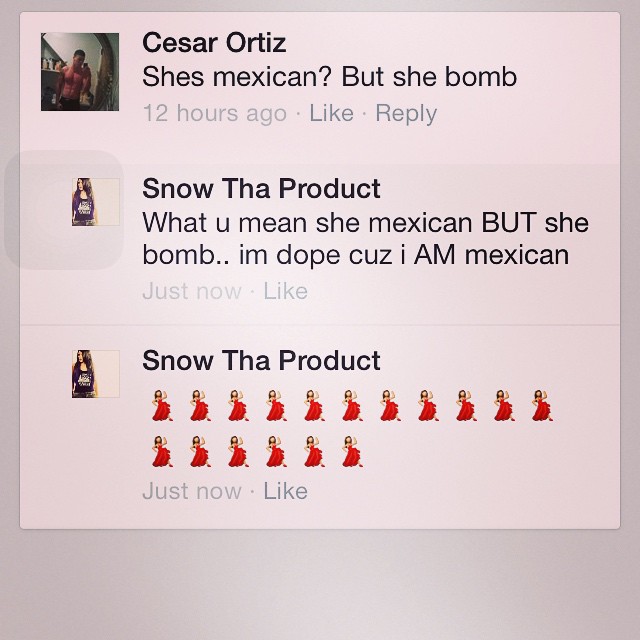 In an interview with Latina, Snow discussed how being Latina has influenced her sound. “I am very Mexican (laughs) so it’s had a lot of influence. I mean, it’s a part of who I am,” said the Atlantic Records-signed emcee. Daughter of undocumented Mexican immigrants, Snow Tha Product has never been shy of representing her Mexican-American identity. “I’ll throw references in there that Mexicans will get,” she told Latina. And when she raps, she effortlessly transitions from English to Spanish. Just more points to add to her dopeness.

We should all thank her for publicly correcting her admirer. There shouldn’t have been a “but” to begin with, but with artists like Snow straight up saying “or nah,” the world (or at least the Facebook comments section) is a better and more aware place.