In a zeitgeist consumed by nostalgia, artists embracing futurism and the daunting task of charting new sonic waters feel like an increasingly necessary breath of fresh air. On Combo Chimbita’s new album Ahomale, a tidal wave of sound and spirituality embraces tropical futurism, more closely evoking the wormhole leading us to another dimension than the destination itself. Singles like “Testigo” and the title track strike an unconventional balance of power chords, frenetic percussion, and space-age synths that thrust the listener into a mind-expanding universe of sabrosura. But before getting too lost in the journey, Carolina Olivero’s wise, commanding vocals cut through the fray, reminding us of the ancestral traditions that created these sounds.

Ahomale is a transcendent record, punctuating Combo Chimbita’s ascent through the indie ranks after years of incessant touring, two consecutive appearances at SXSW and a recent signing to Epitaph Records sister label Anti-. Their upcoming 30+ date tour will bring Ahomale, as well as the band’s thrilling back catalogue, across the US and reunite them with old friends like La Choloteca, El Sancha and Tropa Mágica along the way – while making inroads to parts of the country where Latinx roots music is still finding its foothold.

To learn more about the warrior entity known as Ahomale and the recording process behind the album, we spoke with Combo Chimbita founding member and synth wizard, Prince of Queens.

My first impression of Ahomale is that it’s a profoundly spiritual album. What does Ahomale mean and what inspired the record?

Ahomale is the main character in this episode of the Combo Chimbita saga. She possesses the ability to communicate with the ancestors and channel ancestral energies. This record tells the story of her struggles as she intends to make sense of her powers and find her path in a confused world.

The sound of Ahomale is huge! What was the recording process like, and did you have a specific sound in mind going into the studio?

For our previous records, we [went] into the studio with all the music written and with the intention of capturing our live energy with minimal overdubbing, all together in one room, one take. This time we had less than half the record written when we first entered the studio, which was really cool [because] it allowed us to experiment and flesh out ideas and concepts using the studio as a writing partner.

We made this record with our friend Daniel Schlett at his studio, Strange Weather, in Brooklyn. We worked on other projects before, and from his work with Janka Nabay, Rita Indiana and Nick Hakim, we knew he would make it sound right. We wanted to make a record that sounded new, embracing the depth of tropical rhythms using alternate sonic timbres. [On] Ahomale, we incorporated more electronics and modular synthesis. It was super fun to wild out with pedals and synths, and come up with crazy sounds. 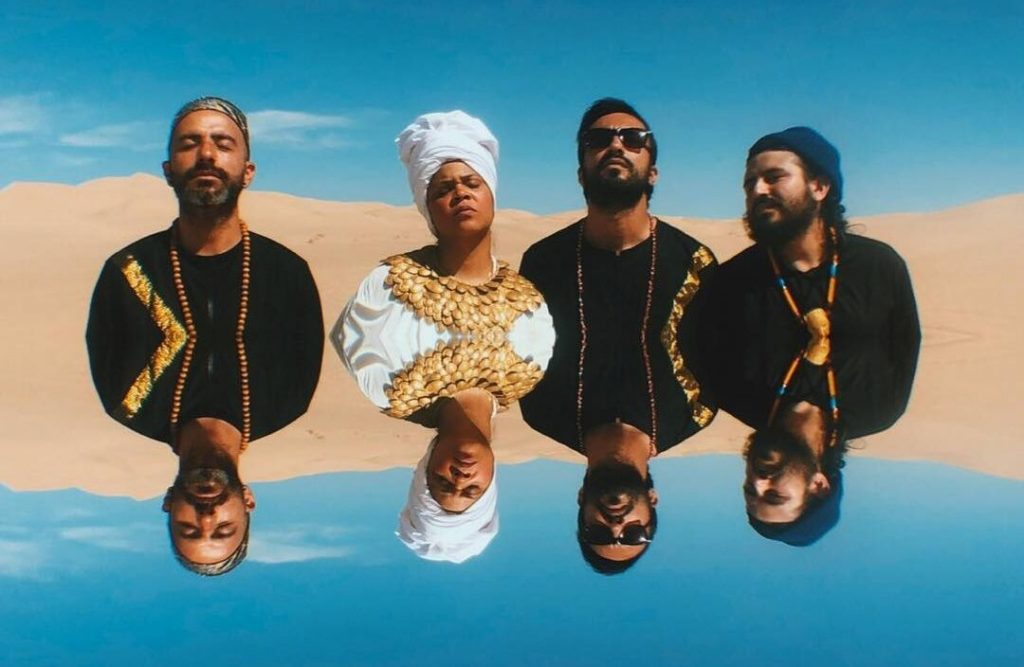 Combo Chimbita has toured with established Anglo bands like Crumb and Parquet Courts, which has taken you to corners of the US where Latinx roots music might not have a huge presence. What has been your experience performing for audiences with these different cultural, language and/or spiritual backgrounds?

It’s really interesting. There are times we find ourselves in places with a mostly Anglo crowd and think “Most of these people have no idea what they are about to see.” But honestly, it’s fun to surprise people. When we perform, we take over the space. We don’t sing in English. We barely speak English at the show. I don’t think we are an easily consumable “indie” band – our thing is pretty unpolished and raw.

There is no doubt Latinx folks feel and understand our music on a deeper level. And it’s kind of cool to perform for diverse crowds and feel like Latinxs have an edge. In the current social and political climate, fucked up as it is, Anglo liberal audiences are deliberately trying to embrace diversity. So far we haven’t felt unwelcomed. [Quite] the opposite – we’ve been in pretty far out places where people [have] probably never heard Latin music this way, and it’s eye opening.

What does the future hold for Combo Chimbita?

I think these past years and with our upcoming tour, we really explored and opened up audiences in the US. We want to go to South America and the Caribbean. We played in Puerto Rico in January and the energy in a room where everyone is Latinx, it’s so powerful and fulfilling. Personally it would be a dream come true to go back to Colombia and play there after 17 years of living in New York.

Ahomale is out May 3. Stream it below, and purchase Combo Chimbita tickets here.