It was a cold and bitter winter when Ela Minus released her most recent EP Adapt, but over the summer, our favorite Colombian tiny dancer has unleashed a series of beautiful, thought-provoking videos that have since warmed our hearts. Back in June, she dropped the charmingly voyeuristic video for “Ceremony,” and now we’re given a personal – if somber – view of her life on tour through the video for “Juan Sant,” premiering today on Remezcla.

Filmed by Mexican audiovisual collective Club Salmón, the video finds Ela roaming Mexico City in a pseudo daze. A kaleidoscopic halo of vulnerability radiates from Ela as the video captures silent moments of contemplation and fatigue while she waits for buses and trains to her gigs, sipping on some much-needed coffee along the way. Ela Minus has performed in Mexico City several times, but “Juan Sant” paints her as lost in the city, perhaps a greater metaphor for the loneliness of a touring musician bouncing from place to place with seemingly no end in sight.

The tour life shows no signs of slowing for Ela Minus, as she prepares to support Shigeto on a run of U.S. shows, concluding an action-packed 2017 by performing at Sonar Bogotá in December. A remix EP called AdaptRemix is also slated for release at the end of the year, so as of right now, we have plenty more tiny dancing to look forward to.

Hardware: Ela Minus' Colorful Rig Is a Small Orchestra of Synths 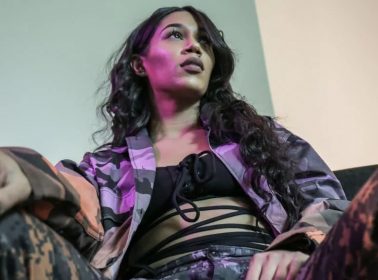