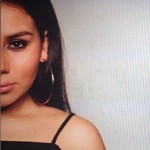 Jorgeline Andrea Torres (aka Ms Nina Los Santos) is everything you’ve ever dreamed of. She considers herself a “pop art[ist] of the modern cyber age,” but you could also add photographer, style icon, and Tumblr beast to her resume. Even i-D Magazine – an innovator of UK art, fashion, music, and youth culture – dubbed her as “the new Internet cult art hero.” The 23-year-old, Argentine-born, and Spain-bound polymath will soon be everywhere on your computer screen. Her often-reblogged artwork consists of found imagery of sex, adored mid-century icons, celebrities, and rappers with photoshopped implants, including pink hair, chola earrings, kush dreams, 40s, and blissfully crude captions. With a mass following on Tumblr, and a whopping 37.2K followers on Instagram, her social media accounts have garnered an insane amount of reposts, likes, and adoration. Her photoshopped image of Snoop Dogg has even been retweeted by the legend himself. Overall, the young Latina net artist has been making a name for herself globally, on and offline. She’s had multiple exhibitions around the world, including two in Madrid and Los Angeles, has been covered by many publications – the aforementioned i-D Magazine, Frische Magazine, and La Moda – and has added another title to her artistic repertoire: reggaetonera. She recently dropped her single “Chupa Chupa.” The reggaeton 2.0 track is nasty, hard-hitting, and something you need to hear this summer. Her moaning “oohsss” and “ahhsss” bring a sensual and grimy flavor to the Chico Sonido-produced track. Inspired by the Da Baddest Bitch Trina, Ms Nina’s monotone voice, on top of the vibrant and dirty beat, brings a much-needed I-get-what-I-want-and-IDGAF attitude. You can tell that there’s plenty more to come.