As we recently reported, some of our favorite indie stars recently hinted at a potential Prince tribute fronted by Neon Indian and featuring the lineup of our dreams. A few weeks later, that dream has come true, as Pitchfork.tv just released the slick in-studio video of “Pop Life,” shot at Midnight Sun Studios in Brooklyn.

While we’ve been swamped with mediocre Prince tributes these days (see: Madonna’s performance at the Billboard Music Awards), there’s no one more fitting to lead this tribute, at least in the indie world. Neon Indian’s music is endlessly inspired by Prince; Palomo even penned a heartfelt piece on the deceased megastar for The Guardian. So, he takes the lead on the Around the World in a Day cut, backed by Xenia Rubinos on keyboards, Holy Ghost!, Ejecta, Kristin Kontrol, Hannah Cohen, Midnight Magic, and Escort’s Adeline slapping that bass. This is one fine, fun, and honest celebration of The Purple One’s legacy.

Watch the video, co-directed by Jim Larson and Palomo himself, below.

Watch this on The Scene.

From Rosario Dawson to Sheila E.: Remembering Prince and His Mentorship of Latino Artists

Here's How the Latino Community is Paying Tribute to Prince 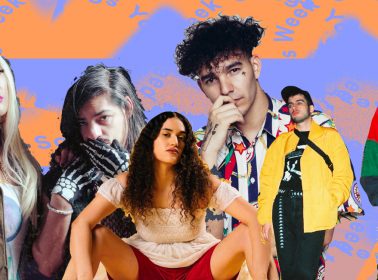