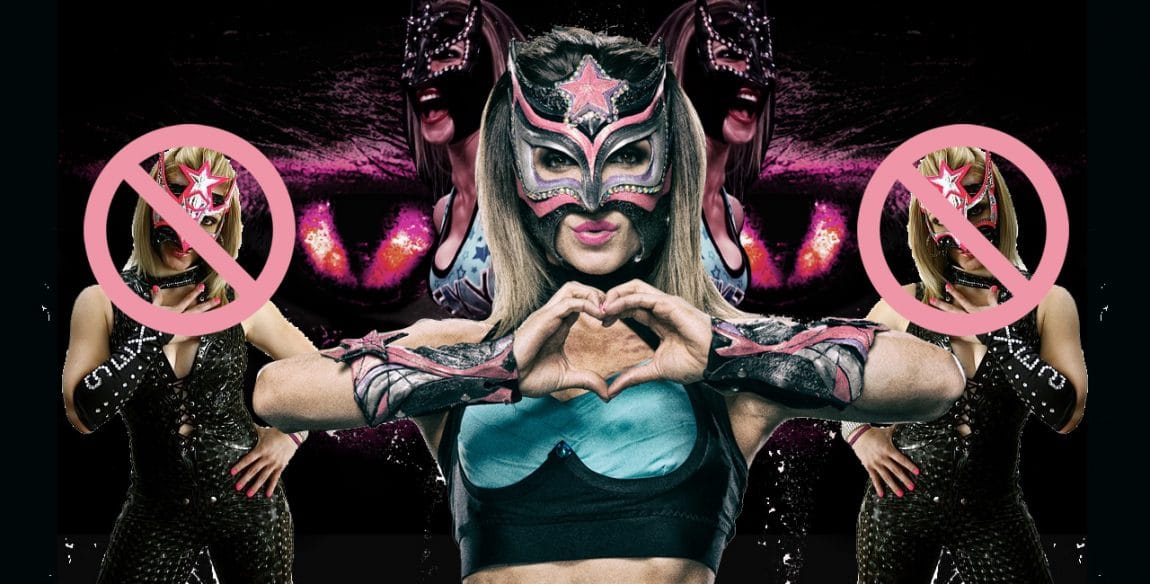 While Mexican lucha libre promotion AAA’s marquee event TripleMania was generally a success–the fact that it was streamed on Twitch.tv should provide an alternative for wrestling streams going forward–one ugly moment from Saturday night has landed a top luchadora in hot water.

During the four-way match for the AAA Reina de Reinas Championship–the company’s top women’s title–defending champion and former Lucha Underground protagonist Sexy Star caught her opponent, the Canadian veteran Rosemary, in an arm-bar submission maneuver. Despite Rosemary tapping out–therefore ending the match, with Sexy Star keeping her title–the champion locked in the submission even harder, turning it from a safe wrestling move into one of the more brutal MMA holds (it was Ronda Rousey’s preferred finishing move in the octagon), one that ended up legitimately injuring her opponent in the process.

As the ref tries to separate them, you can see Sexy Star locking in the submission once more, and yanking on it much harder than you are supposed to in wrestling. Multiple reports emerged after the event stating that Sexy Star did in fact go rogue–also called “shooting” in wrestling terms–and hurt Rosemary for real. The Canadian luchadora is reported to have a possible torn tricep, which would sideline her for multiple months.

The immediate reaction from the wrestling community, both in Mexico and abroad, has been swift and ruthless, and now Sexy Star faces not only scorn but possible loss of job opportunities, as pros from around the world are coming out in support of Rosemary, saying that they will never work with her attacker again.

Sexy Star will never set foot in one of my locker rooms. I hope others follow suit.

DISGUSTING is just one word. We put our lives in each other's hands. So unprofessional. This is how you work yourself out of the business https://t.co/aELhRMO017

Mike, did that girl really hurt @WeAreRosemary ? Just wondering so I can insure she never works any where near me! #OUDK #POWEROFLOVE

Whether it's dick flips or submissions, we constantly put our health in each others hands. If you violate that trust, you're not one of us.

Sending love to my girl @WeAreRosemary the whole wrestling world is behind you!! No room for bullies in this business.

Hot take: if you're unprofessional enough and enough of a garbage human to deliberately injure someone, GTFO. Don't need ya here. kthanksbye

After letting the news sit for a day, Rosemary herself also took to social media to dispel the notion that the spot was a “work,” which is wrestling parlance for something planned beforehand to trick the audience. She also stated that the reason she didn’t immediately react is that she did not want to go to jail while in Mexico:

AAA has had quite a tumultuous year with its Reina de Reinas title; earlier this year, it stripped Taya, another Lucha Underground favorite, of the title for reasons still not clear. In a move shady enough to be worthy of wrestling’s long history of cons, the company asked Johnny Mundo–the former WWE star John Morrison, and Taya’s fiance–to bring the championship belt to a photo shoot, but instead, AAA took the belt and declared the championship vacant; in a twist befitting this strange saga, it would be Sexy Star that would claim the title on July 16, in her return to AAA after a year away from the company. Taya, on the other hand, publicly quit the company after that situation

Neither AAA nor Sexy Star have publicly commented on Saturday’s TripleMania incident as of this time. Sexy Star has already lost a possible job, as WrestleCade–a North Carolina-based promotion–has withdrawn their invitation to the luchadora for an upcoming event:

Our official statement regarding Sexy Star & her scheduled appearance during #WrestleCade Weekend. pic.twitter.com/t5wBIim3wc

While not likely, Sexy Star could also be facing legal action, as purposefully injuring an opponent in a predetermined match can be seen as assault in court; of course, that is under the American legal system, and even then, it is difficult to prove that there was intent. As TripleMania emanated from Mexico, it will be even more difficult to prove that Sexy Star acted illegally at the conclusion of the match.