Paolo Guerrero May Not Be Playing in Russia, But He’s Still the Star of Peru’s World Cup Merch 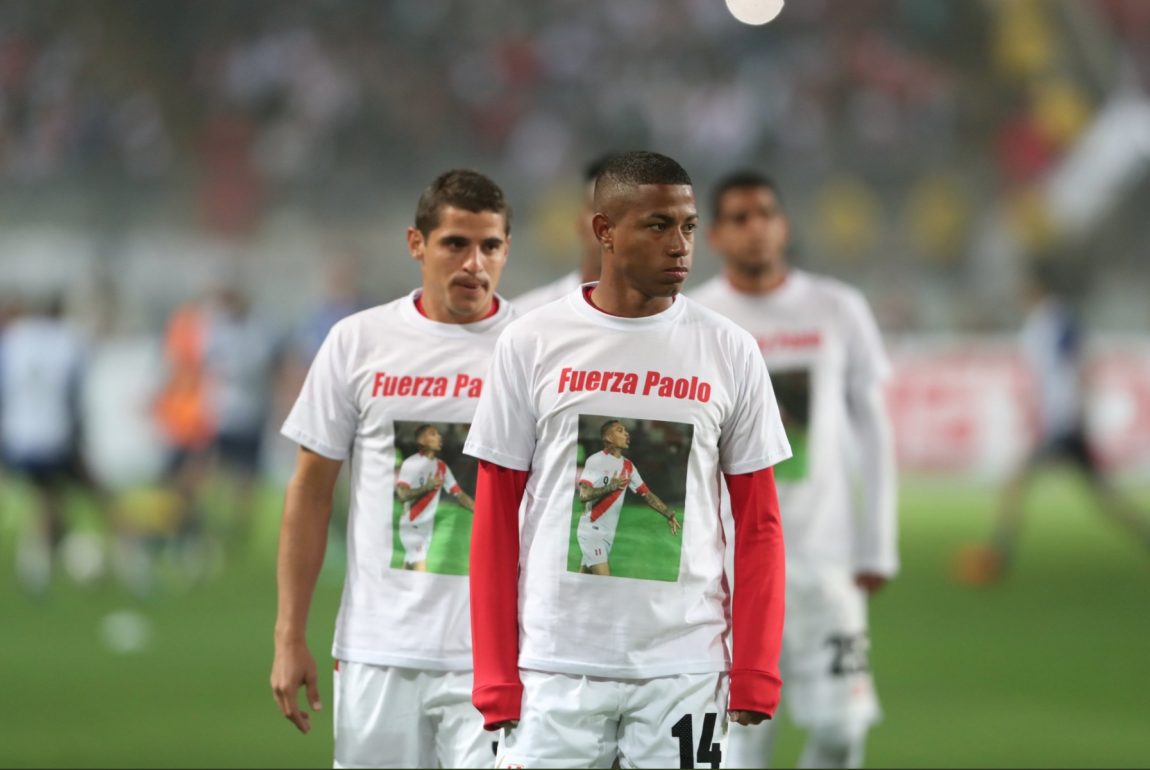 +
Peruvian players show solidarity with banned captain, Paolo Guerrero, ahead of their World Cup friendly with Scotland. Photo via COPA90 US.

Peru’s national team jumped to the pitch of the Estadio Nacional on Tuesday night wearing the only shirt that can generate as much fervor and support among their fans as their official team jersey: a shirt with a huge photo of Paolo Guerrero with the phrase “Fuerza Paolo.”

The 45,000 fans that filled the stadium responded with a huge ovation for the absent Guerrero, the star forward of the team who is set to miss the World Cup after being suspended for 14 months by the Court of Arbitration for Sport after testing positive for the cocaine metabolite benzoylecgonine, which he argues was the result of drinking coca tea, an ancient and legal cultural tradition in Perú.

His teammates dedicated the 2-0 victory in the friendly match against Scotland to their captain, with midfielder Christian Cueva imitating Guerrero’s signature celebration after scoring the first goal of the night.

Guerrero has received an outpouring of support from his teammates, rivals and soccer legends, but some of the most creative tributes have come from his countrymen: Jorddy Ortiz, a self-described fan of soccer and the (Peru) national team composed and sang “Fuerza Capitán,” an ode to Guerrero with lyrics like “Impossible not to miss you, impossible not to admire you /You took us to the top, because of you we’re going to the World Cup.” Guerrero was also immortalized in a poem written by Juan Elmer Caicedo Niquén, a professor from the town of Monsefú, in northern Peru, according to RPP-Noticias.

Although CAS is unlikely to change its decision, Guerrero is featured heavily in the World Cup merchandise sold in Perú. The World Cup fever has been a boon for manufacturers who have seized the opportunity to sell all sorts of merchandise related to the team: from t-shirts, flags and hats, to pillows splashed with the faces of players. In the informal markets of Lima you can find plushies of Zabivaka, the World Cup official mascot, wearing the Peruvian shirt, and the so called “Tigres del Mundial,” stuffed tigers honoring Ricardo “El Tigre” Gareca, the Argentinian coach that many credit for the success of the team.

No matter their performance in Russia, the Peruvians are sure to have a memento of their World Cup campaign (and Guerrero’s plight) for years to come.