Maradona Obit: A Soccer Player & Rockstar for the Ages
Search

Remembering Maradona, A Soccer Player & Rockstar for the Ages

By Juan Felipe Sierra
12.02.20
Art by Stephany Torres for Remezcla

You can read this text in Spanish here. Translation by Debora Olalla.

The death of “El Pelusa” is the confirmation of a soccer player’s legacy in culture, music, art, sport, and even religion. A heart attack ended the life of “D10S,” but the things he did while he was alive make his story eternal because of how he influenced the lives of so many people—

As a football player: 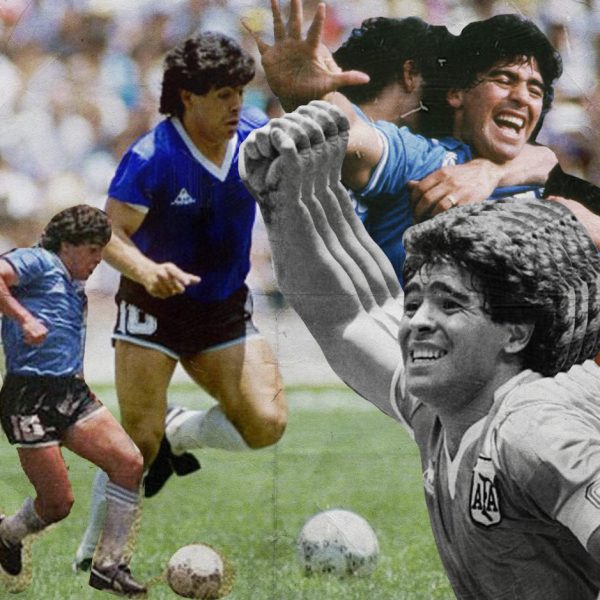 Diego Armando Maradona is the author of the “goal of the century“—a score that was immortalized by the way he used his skills, speed and dodging; it is recognized as the best trick of all times in world’s soccer as Argentina eliminated England in the quarterfinals of the World Cup in Mexico in 1986, in the midst of a foreign policy tension derived from the Falklands War between both countries. But, he’s much more than that.

“El Diego” is the proof of the quality and success of Argentinean soccer players who gave many of those who succeeded him an example to follow (at least in sports), shining in his role as “10” carrying the ball at great speed, looking for spaces, scoring and generating engineering in the field, and giving opportunities to his teammates.

Many commentators have pointed out that the Argentines Maradona and Messi, the Brazilian Pelé and the Portuguese Cristiano Ronaldo are the best players that have ever stepped on the field, and already three of them (including Maradona), are part of the South American Football Confederation, so it was surprising that this association declared Diego the best of all times.

“El Pelusa,” as he was called because of his lush hair, did not achieve a great number of titles, but he did obtain several of the most important ones, such as the 1986 World Cup, the 1990 sub-championship with the Argentine National Team. Later, with Boca Juniors—the team of which he was a professed fan and member—he won a First Division championship in 1981. Then, in Barcelona, during his first international experience, he won the three most important cups between 1982 and 1983. Moreover, in the following 7 years that he was at Napoli, he won two Serie A, one Italian Cup, one Italian Super Cup and one European Cup.

With Napoli, his second love:

In 1983 the Argentinean suffered one of the worst injuries in his career, as he ended up with a broken left leg ankle after a foul from Andoni Goikoetxea and was out of the game for 6 months. One year later, both players met again in a final that was filled with tension and insults, days before and during the match. In the end, Maradona and Miguel Ángel Sola got into a fistfight and kicked each other in a pitched battle. The Spanish Federation sanctioned Diego with a three-month suspension, which caused him to be sold to Napoli, a team that was small until his arrival, as it only had one trophy and the “10” gave them the five the most important ones.

Therefore, it is not just any random fact that, as a result of his death, the stadium of the Azzurri club was renamed San Paolo-Diego Maradona, as communicated by its president recently as a tribute to what the Argentinean represented.

Remezcla had the chance to talk to Gianfranco Zola, Chelsea’s greatest idol and one of Diego’s colleagues in Naples who, in the midst of his sadness, remembered him saying: “For me, he is the best player of all times, there was no one like Diego. We understood each other very well in the field. I don’t feel like doing anything at the moment, it’s as if one of my own kids has died.” 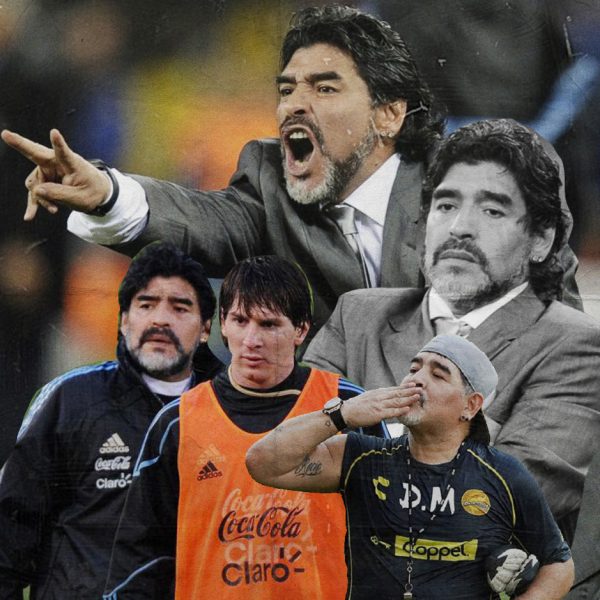 At the age of 37, on October 30, 1997, Maradona retired from soccer as a player and, after dedicating himself to various activities related to the sport, he came to coach the Argentinian National Team in 2008, which managed to barely qualify for the World Cup in South Africa in 2010 and led to a new sanction for Diego, because when he was criticized by the press he decided to throw a lot of profanities that cost him 2 months off the field and 25 thousand Swiss francs. Argentina reached the quarterfinals where they were eliminated by Germany 4-0 and his era in the ‘Albiceleste’ ended.

Years later, Diego trained Al-Wasl and Al-Fujairah in the Arab Emirates, Dorados de Sinaloa in Mexico, who almost got him promoted in two consecutive years and finally the club he was in charge of when he died, Gimnasia de La Plata.

Diego lived as a rockstar; along with his many sports successes came many addictions which he experienced for the first time while in Barcelona. As revealed in his autobiography, drug and narcotic use then increased in Diego’s life.

“Toxic positivism and its addiction to success,” is what many people think that caused Diego Armando’s decline and his initiation on drugs, but his life was always surrounded by irrational fanatics that always praised him for everything, and he enjoyed the life of a celebrity who was invited to rock concerts where he met great personalities such as Freddy Mercury, Liam and Noel Gallagher, Andres Calamaro, Fito Paez and Charly Garcia.

But the fanaticism grew to such an extent that the following generations of soccer players regarded him as an example as a soccer player but not in his personal life. It is said that because of the problems in Maradona’s personal life, all the clubs in the world have people dedicated to taking care of the sportsmen—integrating teams who, mainly, instruct and teach them to take care of their money and invest it in the future because of the short active life span of a high-performance sportsman, which on average ends at the age of 36.

Due to court disputes, and several paternity tests, “El Pibe de Oro” had to acknowledge three children throughout his life. In 2006, he broke a glass over the head of a woman who had an argument with her daughter Giannina in Polynesia. In 2014, Diego was filmed while abusing Rocio Oliva, his partner, as he would beat her twice in Dubai.

From soccer player to “showman,” Maradona became the host of a TV show on Channel 13, where he had Pele, Lionel Messi and Carlos Tevez as guests, and even interviewed himself. When asked what he would say to himself when he died, he answered: “Thank you for having played soccer, thank you for playing soccer because it is the sport that gave me the most joy, freedom. It’s like touching the sky with your hands thanks to the ball.”

The center of a religion:

The Maradonian Church, although it sounds like a joke, is a reality. It was founded in 1998 and is part of the post-modern religions that pays homage to Diego Maradona and has branches in about 12 countries, with about 150,000 followers, with its own bible called “I am the Diego of the people,” which has 10 commandments and its own prayers. In addition, its image is the Hand of God, in commemoration of that goal he scored against England with his hand, without any referee noticing it in the 1986 World Cup.

D10S’s repentance was always evident and was immortalized in several of his statements including his belief that “the ball doesn’t get stained,” and in one of his interviews in which he said “You know the kind of player I would have been if I hadn’t taken cocaine? What a player we have missed!”