Shakira Barrera: Why I Hope You'll Join Me at This Gala to Benefit Nicaraguan Refugees
Search
Culture

Shakira Barrera: Why I Hope You’ll Join Me at This Gala to Benefit Nicaraguan Refugees

Nicaraguans, they’ve been stripped of their pride a little bit. But we want Nicaraguan families to know they’re not alone. That’s why I have joined Amigos de Nicaragua, Azul y Blanco in throwing a gala to benefit the Nicaraguans who have been forced to flee Costa Rica in the last year.

My mom was born in Nicaragua, and I’m very lucky to be born here in the United States, but I could easily see myself being born in Nicaragua and having to go through these struggles. Since April 18, 2018, Nicaraguans have been protesting the government, calling for change, and they’ve been suppressed. When everything started, we learned about it pretty much through phone calls and what my aunts had seen and then word-of-mouth to my mother. We followed this outlet and YouTube channel – 100% Noticias – and it was one of the only independent media that Nicaragua had. They were actually shut down a few months ago.

We want Nicaraguan families to know they’re not alone.

On January 27, 2019, I walked the SAG Awards, and I made a political statement. My dress opened to reveal a Nicaraguan flag, and I had a clutch that was custom designed by St. Germaine, a Nicaraguan designer here in Los Angeles, who does Janelle Monae’s hats. There aren’t many Nicaraguans in the industry, but right now, because I’m in Hollywood, my voice is a little bit louder, so it’s important that I use this platform. I’ve seen some positive response from others, including Amigos de Nicaragua, Azul y Blanco.

After the SAG Awards, I ended up getting a message from Amigos de Nicaragua, a non-profit organization, and it was from one of the board members saying they’d love to collaborate with me and they loved what I stood for. It just ended up being a really good match, and I’m now an ambassador to this non-profit organization, my first time working with a non-profit in this capacity. We’re fairly new, but we are really understanding of what the needs are. On April 6, 2019, we’re throwing the gala fundraiser to help the people of Nicaragua. There will be dinner, a live performance, music, and a silent auction. (I’ll be doing a separate giveaway via Instagram for those who can’t be there but want to donate.)

We’re not trying to act as politicians. What we are is humanitarians.

We’re not trying to act as politicians. What we are is humanitarians and that is our focus: humanitarian aid. We understand that there is a lot of need. A lot of refugees that are in Costa Rica and a lot of refugees that are here need medical services. They’ve been injured during these protests, they need just basic food and clothes, and they’ve had to evacuate due to the crisis. So we’re stepping in as humanitarians; we’re stepping in just for basic human needs.

By attending this gala, your money is going toward these refugees, toward kids, and toward families. It’s about as much as filling a need as giving them hope. If you donate or attend the gala, you’re showing your support. You should also understand that we’re educating the people we’re giving the money to. We’re going to educate them on what to do, on how to best move forward. It’s not just throwing money in their direction and hoping they know what to do with it. We’re going the extra mile to help them rebuild.

We want these families to know that it isn’t their fault that this is happening, and that they have support here. Although we’re Nicaraguan-American, Nicaragua is in our blood. We should be supportive and have a big community, just like Puerto Ricans do, just like Dominicans do, just like Cubans do. I feel passionate about this because it’s very important to honor our roots and where we come from. That could easily be any one of us.

With what’s been going on, it feels like history is repeating itself. It seems kind of stagnant in Nicaragua. The only way to fix that is by getting together and rebuilding as best as we can. That’s why I hope you, whether you’re Nicaraguan or not, can come and join us at this gala, where you can support and learn about a culture that’s beautiful, that could really contribute a lot to the United States if we were just to give our assistance right now when they need it the most.

The Amigos de Nicaragua, Azul y Blanco gala takes place on April 6, 2019 in Los Angeles from 6 p.m. to midnight. Tickets are $150. To purchase a ticket for yourself (or to donate one to someone else), visit the non-profit’s site here. Or make a donation here. 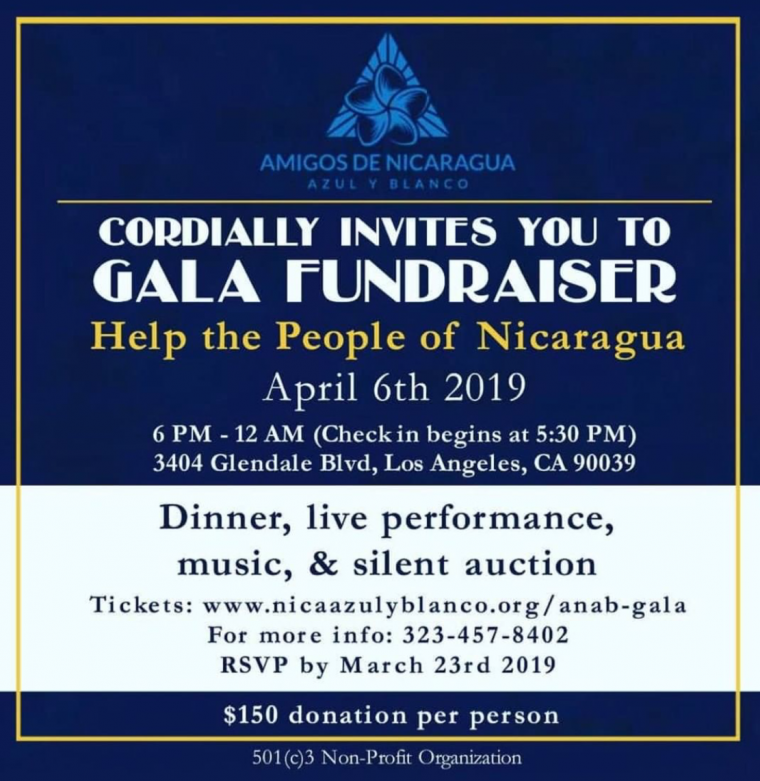 As told to Yara Simón.