Angel Bismark Curiel Never Saw Himself as a Heartthrob, But ‘Pose’ Fans Are Thirsting for Lil Papi

Actor Angel Bismark Curiel does not take for granted the love fans have for Lil Papi, his character on FX’s critically acclaimed Pose. A lovable young runaway who’d been through the foster system before he took to the streets and eventually joined the House of Evangelista, Lil Papi has long been a fan favorite. But now that the second season of the 1990-set show has bulked up his role and mapped out a possible romantic storyline between him and up-and-coming model Angel (Indya Moore), the feverish Papi fandom is now in full bloom. A cursory look at Twitter reveals plenty of tweets showering the actor and his character with love. They run from the cute (“I have a big crush on Lil Papi and that’s that,” “Lil Papi from Pose is legit the love of my life”) to the NSFW (“Lil Papi and Ricky Evangelista from POSE really make me wet”). Even Out magazine recently named the character “the finest man on TV right now.”

All of that attention (thirsty and otherwise) is a lot to take in. But the actor is enjoying it and taking it in stride. Indeed, watching audiences respond to Lil Papi that way has made Curiel see himself anew. “I find all that — I don’t want to say funny, you know — but I find that so intriguing,” he told Remezcla. “Because honestly, I never really thought of myself as that person. I’ve never seen myself like that. I’ve always just seen myself very much as a supportive, sometimes charming, friendly young man.” He was the sidekick. The friend. Never the dashing guy who’d make fans swoon. It wasn’t until Pose producer Ryan Murphy saw him on screen toward the end of the show’s first season and told him as much that the idea of him being leading man potential even crossed his mind.

“I found myself sitting down with my thoughts and trying to figure out who I am as an Afro-Taíno guy — as a man of color — and what that means for me as I roll into what people are seeing of me, as a leading man, or a sexy figure, or whatever it is.” In this, Curiel’s self-reflection merely echoes the cultural shift that Pose represents. Focused on young Latino hustlers, African-American trans sex workers, as well as black and brown gay men, the Steven Canals-created show demands its viewers see characters often pushed to the margins as central.

All the while, it also re-imagines what a leading man (and a leading lady) can look like. The blossoming romance between Angel and Lil Papi is proof of that. It’s a relationship that Curiel is very excited about. “I think of Papi as someone who has always been very loving and protective about his family. And obviously, Angel to Papi is, like to many others, such a beautiful, strong woman that I think he was just very attracted to that.”

As this week’s episode hinted at, this pairing may lead to heartbreak, which explains why fans are thrilled and worried in equal measure. “It’s always exciting to see the fans be so supportive, and so protective of this character just as much as I am,” Curiel added. “I feel almost so close to Papi, because I am a part of Papi just as much as Papi is a part of me. And to see the fans be protective of him makes me feel safe.”

Your boy is back!!! Lil Papi got a new lease on life. The glow up is real, y’all. Watch @PoseOnFX starting June 11 every Tuesday this summer. #posefx pic.twitter.com/U0FDpBmB8H

That safety is something else he doesn’t take for granted. Had it not been for what he calls ‘divine intervention,’ after all, he would have joined the army straight out of high school rather than pursue a career as an actor. His plan was to join the military but a supportive teacher saw something in him. “She sat me down and she told me that I could do a lot more good in this world with a script in my hand than a rifle. And that very much changed my life.” Even talking about that moment brings tears to his eyes and gets him choked up, a reminder that he’s come a long way since that very same teacher first showed him John Leguizamo’s Freak. Seeing that HBO special was an experience that was earth-shattering. To this day it guides what Curiel does and why he cherishes how warmly Lil Papi is being received. 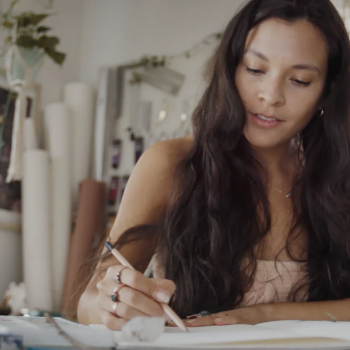