Meet Teresa Delgado, a Fangirl Who Turned Her Love of ‘Star Wars’ Into a Podcast Empire

Teresa Delgado is only in her early thirties but her love of Star Wars is decades old. She was one of the many self-proclaimed fangirls who attended last week’s Star Wars Celebration in Orlando, Florida. From her home in Austin, Texas this high school teacher is a podcasting maven in her spare time. Acting as a co-host to six different podcasts on Star Wars, Disney movies, galactic fashions and a range of other geeky topics –  she’s turned her hobby into a fandom empire. She also lends her hand to writing for a Star Wars website run by aficionados of the franchise.

While many might imagine that a conference full of diehard sci-fi geeks tends towards the white male demographic, Delgado asserts that’s not the case. “Star Wars really is for everyone. It is a melting pot of races, ethnicities, sexual orientations and so much more,” she told Remezcla in an email interview. A look around the convention center proves her right. The conference floor brimmed over with imperial cosplayers, 501st Legion members, and multi-generational packs of Star Wars heads from across the globe.

After the close of Celebration and she headed home back to Texas, we caught up with Delgado to talk about juggling her hosting duties, how her love of the Star Wars franchise started, and what Latina actress she’d like to see cast in a Star Wars movie.

Read on to hear what she had to say. 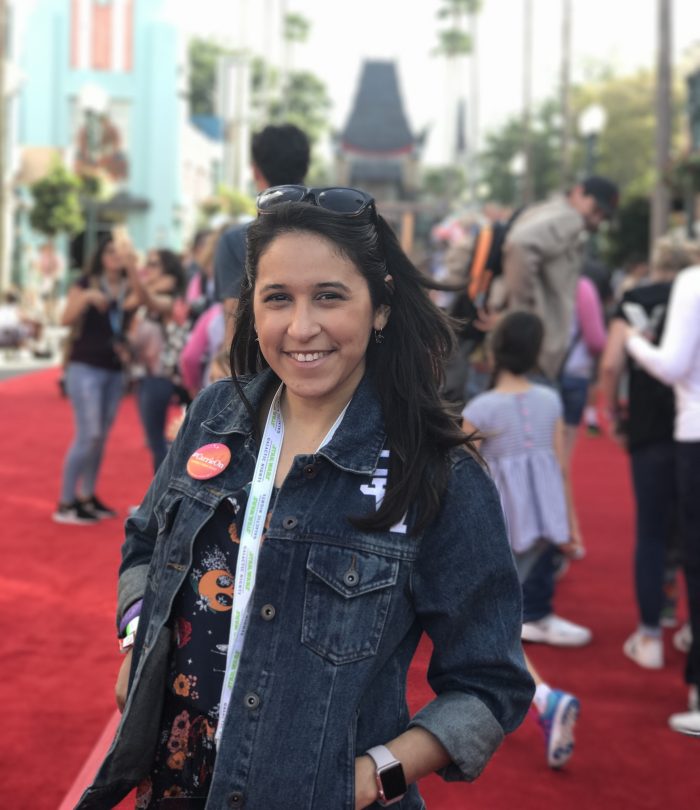 Where did you grow up? What’s your family’s background?

I was born in Austin, Texas and I still live in the best city in the world. Austin is such a great place that is so inclusive of all people and it makes me feel safe. My family is primarily Mexican-American. We have lived in this area of Texas for many generations.

What is your occupation?

My day job is teaching High School in Austin, Texas. I love doing what I do and getting to share my love of geeky things with my students.

Why did you decide to attend Star Wars Celebration?

I work for my own geek fandom-based website as well as the biggest international Star Wars fan site. I also do six podcasts centered on Star Wars and Geek fandom. Star Wars Celebration is an opportunity for me to provide content for all my projects as well as see many of my friends. The majority of my closest friends are people I have met through social media in the geek fandom world. I have met and interacted with many of them over the years through different conventions and when I go to Star Wars Celebration it is like a giant family reunion.

When did you see Star Wars for the first time and which movie was it?

Star Wars was something that has been a part of my life since I can remember. My family was big into the films and since I was 6 years old so was I. My mom is actually the one that got me into it because she was such a fan. The story can be heard on the podcast My Star Wars Story. There is an entire episode where I talk about my entire story of my fandom. The short version is essentially getting Chicken Pox was my gateway. That is when I really sat down and watched all the films for the first time (this was before the prequels). If there was any one character that locked me in when I was six it was Wicket the Ewok. After that my fandom was reignited when I was 14 when The Phantom Menace came out. I LOVE the prequel trilogy; they are my favorites of the Star Wars films. They were the first Star Wars films I saw in the theater and for that they hold a special place. Ever since 1999, my No. 1 Star Wars character has been Darth Maul.

What about the movies specifically made you a fan?

My passion for Star Wars is based on many things but if I had to narrow it down it would be the philosophy of the force. I love diving deep into the inner workings of the force both the dark and the light. I love how it binds the galaxy together and how our faith in something like the force truly is the background of the galaxy. I also love the galaxy itself and the planets, where they are, who inhabits the different planets and how the galaxy is all intertwined. There really is not one specific character but the ideas of the Jedi and the Sith are definitely the thing that keep me coming back. I love the idea of lightsabers, kyber crystals, holocrons, and ancient knowledge of the first Jedi and Sith to ever appear in the galaxy.

When and why did you start podcasting?

My first podcast started in 2013. My friend Aaron Goins and I are both big Star Wars books and comics fans. I actually met him through my friends Riley and Bethany Blanton who run a big Star Wars site and podcast called The Star Wars Report. There was one other books podcast that I knew of at the time and I loved what they did. That show is still on the air and it is run by two fabulous people Jay Sheppard and Chris Wyman. They inspired me to want to talk about my love of Star Wars books so Aaron and I created Star Wars Bookworms. In February of 2018, we will have been on the air for 5 years.

After that I discovered that recording my thoughts through talking was much easier than blogging. So it spiraled out of control from there. Now I co-host 6 podcasts [including Star Wars Bookworms].

Fangirls Going Rogue: This is probably the most popular of all my shows. It was the first all-female-hosted Star Wars podcast and we focus on being positive, creating an inclusive community, inspiring women and girls to be a part of Star Wars and we highlight women who work in all the different areas of Star Wars. We have a great time talking and diving deep into the themes of Star Wars.

Disney Vault Talk: This is a show I do that focuses on the films of Disney. We are currently going through the canon numbered timeline of Disney Animation and will be tackling the Pixar films soon.

Rebel Yell: This show focuses on the Star Wars animated show on Disney XD, Star Wars Rebels. We love this show and enjoy reviewing every episode. Hopefully we will be expanding soon to include interviews.

Galactic Fashion: This show focuses on the world of Star Wars and geek fashion. We look at the new fashion trends things that are being created and sold. We will sometimes rate some of our favorite character’s outfits. We also like to highlight people in the geek fashion industry.

Fangirl Chat: The smallest of my shows this is where the hosts of Fangirls Going Rogue will tackle other geek properties like Marvel, Ghostbusters, Hunger Games and much more. It give us a place to talk and bond over all the other things we love.

When you travel to conventions or fan events are there lots of other Latinos or people of color? Do you know of other Latinas that are active in the Star Wars fans groups?

Star Wars really is for everyone. It is a melting pot of races, ethnicities, sexual orientations and so much more. The Star Wars fandom is one of the nicest most compassionate fan communities there is. While prejudice does exist it is not very common. Most of the time when we see bullying it is the younger fans that get bullied. We try to embrace them and help them feel confident and I think we all work very hard at that.

My co-host for Galactic Fashion is Latina. Her name is Johnamarie Macias and she is so awesome.

I actually try to not focus on race in fandom because I feel like it makes things divisive. I am just glad that I have the friends I have and I am very lucky to have so much support.

Hmmm… @starwars for @rosariodawson? YES! She talks about wanting to be in a future film.

If you could cast a Latina actress in the lead role of a Star Wars movie who would it be?

This is not as easy as you may think. I am very protective of Star Wars and if there is a Latina actress that wants to be involved in Star Wars I want them to be fans of the property and respectful of what it means to all of us. With that being said I would encourage them to look at Diego Luna from Star Wars: Rogue One. He is such a fan but also has tremendous respect for it. He wanted to be a part of it so that he could represent the Latino community but also be a voice. Any Latina actress would need to consider this as an example before getting involved.

The only person I can think of that fits this role right now is Rosario Dawson. She recently tweeted using the hashtag #AhsokaLives that she would like to play the character Ahsoka Tano. This to me tells me she knows this character that rose from a cartoon, she understands her importance and that she herself is a fan. This is the kind of thing that we in fandom appreciate and if she ever joined our community by being in a Star Wars film she would be embraced.