What It Was Like to Be In a Punk Band With Beto O’Rourke, According to Cedric Bixler-Zavala

Beto O’Rourke’s legend continues to grow, despite the Texas GOP’s repeated attempts to stifle it. The recent whirlwind around the congressman’s run against Ted Cruz for his senate seat took a serendipitous turn on Wednesday, as the party tweeted out a photo of the debut 7” record from the candidate’s former punk band. Foss’ The El Paso Pussycats – which took its name from an abandoned TV pilot about a group of kickass crime-fighting women – shows the future congressman in a dress, and holds about eight minutes of Dischord Records-inspired, sun-washed El Paso punk. What was clearly meant as a jab at the congressman’s punk rock past quickly turned into an onslaught of Twitter activity both praising O’Rourke for his DIY past and admonishing the Texas GOP for the ridiculousness of their self-own. Among those amused by the GOP’s fruitless tactic was a former bandmate of O’Rourke’s: Cedric Bixler-Zavala of the influential post-hardcore band At The Drive-In, and later The Mars Volta, among others. Whatever the intended result, it’s clear the GOP is becoming increasingly scared and is resorting to tactics that may seem petty for many, and continually serve to boost O’Rourke’s profile.

A side effect of the GOP’s tweets is the renewed attention on the congressman’s old punk band, Foss. The spotlight on the band led many to dig up an old performance of theirs – one of their only publicly available – on a local El Paso cable access show called Let’s Get Real. The clip shows the young band – which included Bixler-Zavala on drums – stalling to start their set, then seemingly fumbling through what can best be described as an art-rock onslaught of distorted noise, much to the chagrin of the buttoned-up host. “We were just taking the piss out of the host,” Bixler-Zavala tells Remezcla over the phone. “The host was a little on the Republican Christian side, and he pulled us aside before taping and told us he wanted to start an all-white dude ranch,” he says, explaining the kind of bigotry they felt from the host and why the band ultimately decided to play around on stage rather than perform one of their actual songs.

“I truly believe Beto to be the answer. He really gives a fuck.”

As goofy and seemingly unprofessional as that performance was, Foss was actually a young band that was beginning to be taken seriously across the country, and playing drums in the band was a formative experience for the young Bixler-Zavala, who credits much of what he learned about DIY touring from his time with Foss. “We got all the way to Canada, and we at one point were hanging out with this girl named Leslie who had big dreadlocks at the time…[she was a] big champion of our band,” Bixler recalls. “Twenty years pass, and I see some girl coming up in the news and her name is Feist and I’m like, ‘Wow, it’s her!’ and I’m like, ‘She was one of the people that helped Foss!’ She’s one of the fucking people that would get us a place to stay and would come to our shows and would come onstage and sing certain songs with us. She was fucking cool man,” he remembers.

And it’s this DIY primer that Bixler cites as an invaluable learning experience, not only helping to launch his own career with At The Drive-In and later The Mars Volta, but also something he claims is evident every day in O’Rourke’s strategy in this senate race. From walking door-to-door to driving across the state to meet his potential constituents, Bixler-Zavala sees the same punk rock spirit he saw when he was just a kid in a band with the congressman. “I asked [O’Rourke and founding member Arlo Klahr] – I was like who’s booking [the tour]? They pulled out a book called Book Your Own Fucking Life by Maximum RocknRoll, and I had no idea what that was. I opened it and it was basically a guide and a sort of directory for places to play or to crash across the United States…It was just phone numbers.”

It’s that punk spirit that scares the GOP, according to Bixler-Zavala. “He’s not making money the way most politicians are,” Bixler-Zavala says about O’Rourke’s grassroots approach to fundraising. Beto has famously rejected all donations from political action committees in his campaign. “And I think that really scares a lot of them because [politicians] are so used to that system, and they’re so used to scratching each other’s backs that we all suffer from that in the end and he’s you know, he’s like, ‘No I’m not going to do that.’ And that is just so inspiring,” Bixler-Zavala says, in awe of his old friend.

“I learned how to fuck shit up from them.”

But the awe doesn’t just extend to O’Rourke’s political career. Bixler-Zavala still gets teary-eyed when he thinks about the power of the music they made together, particularly the song “Rise” off of The El Paso Pussycats. “Those opening lines always give me goosebumps. It’s like, ‘What does it take/For a man to make the same mistakes/Day after day,’ and the way either Mike or Arlo or Beto [to this day he’s unsure who sang the line] says the next line, ‘I want it all!’ He says it in such a desperate way…when I heard that from them, I was like, ‘Holy shit, this is cool.’”

Whatever the results in the upcoming election, it’s clear that Beto O’Rourke has made an impression, as his profile continues to grow. Despite repeated attacks, including criticism of his Spanish-language nickname (“We always called him Beto!” Bixler-Zavala exclaims), to attacks on his punk rock past, O’Rourke gains followers wherever he goes, whether it be campaigning door-to-door across Texas, skating in Whataburger parking lots, or touring with his punk band across the country in a white station wagon.

And as for the impression O’Rourke and Foss made on a young punk kid who later went on to tour the world and knock down doors for future generations of aspiring Latinx post-hardcore kids – first with At The Drive-In and later with The Mars Volta – “I learned how to fuck shit up from them,” Bixler-Zavala says. “I truly believe Beto to be the answer. He really gives a fuck.”

Listen to a vinyl rip of the Government Issue and Rites of Spring-influenced 7″ The El Paso Pussycats, courtesy of Cedric Bixler-Zavala. 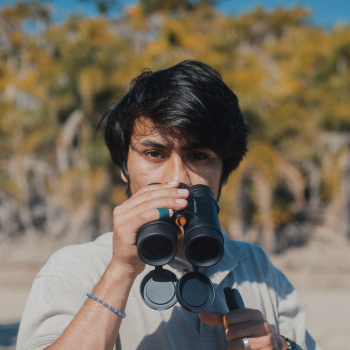