BrunOG is immaculately dressed in a crisp white cotton changshan and leather baseball cap, navigating the chaotic scene of Festival Ceremonia’s near cancellation with the aplomb of a seasoned veteran, rolling with the punches of a highly unusual day. Standing in the eye of this storm, the Mexican DJ and producer is dynamic, articulate, and empathetic, keeping laser focus on the ultimate prize.

He is only 23 years old, but has been in the production game for a decade, and DJing live for nearly eight years. “I consider myself a life-long student,” he says, “since in this particular career I’ve had to learn everything by my own means.” He first got his name on the radar by crafting remixes for hip-hop acts like La Banda Bastön and Álvaro Díaz, and linking with hip-hop collective Homegrown Entertainment. Though hip-hop and reggaeton have ultimately become his calling cards, BrunOG is evolving and updating his beloved genres, applying synth and noise textures that evoke the blurring boundaries between the mainstream and underground. Though these beats are still crafted with a mainstream audience in mind, the young chilango collides the best parts of SoundCloud surfing with your favorite reggaetonero’s VEVO channel. 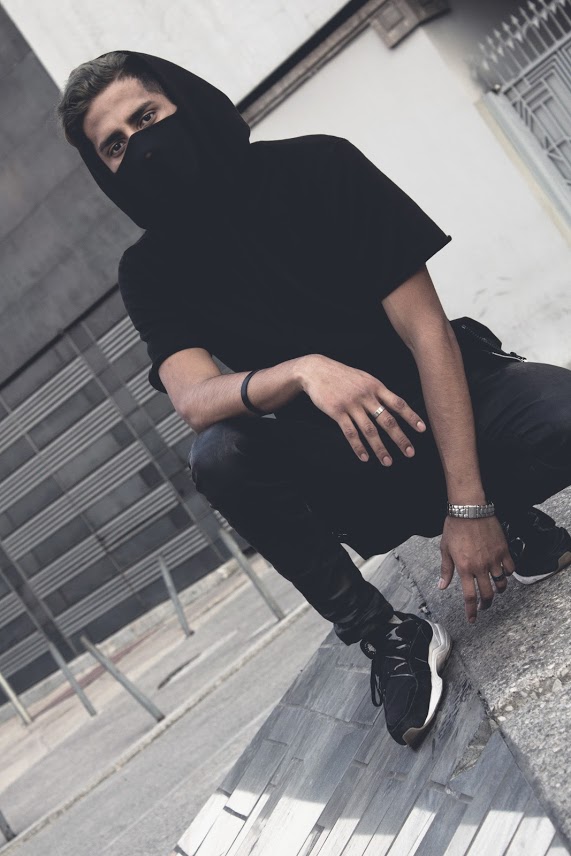 “As a DJ project, my music is oriented towards the commercial, or really towards making people dance,” he explains. “I like to incorporate pop, hip-hop from the early 2000s, trap, reggaeton, and sometimes even indie and electronica. I feel all my projects need to have their distinguishing BrunOG factor, since I consider myself a producer, not just a musician who tries to do everything. I was recently saying that if I ever have the chance to work with a norteño band, I’d be very excited about the new challenge. The good thing about projects outside your comfort zone is you learn from every artist and every record.”

After establishing a solid base in hip-hop, BrunOG dove right into reggaeton, citing his constant uprooting as a turning point for his musical identity. “Where I used to live, we were never super stable,” he starts. “The most time we ever spent in one house or neighborhood was five years, and for awhile I lived in a very reggaeton-oriented hood where my family and friends made, consumed, and lived that lifestyle…I came up at a time when reggaeton became inescapable – at the time when reggaeton Latino was playing everywhere, when “Salió el Sol” by Don Omar was on the radio, when Plan B and Daddy Yankee were making it big. It was the time when reggaeton fully consolidated as a genre. And I loved it, and I had to hide [those feelings] because it was still during the period when reggaeton was not fully accepted.”

BrunOG’s nuanced approach to production has led to partnerships with some of the buzziest hip-hop talent in Mexico today; he’s collabed Los Xxxulos crew, MCs Yoga Fire and FNTXY, and is the architect of 2016 hip-hop anthem “Homegrizzy Boyz.” But his keen business sense is also having a transformative effect on reggaeton. While breaking down the bachata throwback of his track “Sedúceme” with local MCs T.Y, he explains how tailoring the traditionally Caribbean rhythm to locals is shaping the next generation of Mexican reggaetoneros. “That was an effort to rescue reggaeton from 2004,” he says. “We wanted to rescue all those rhythms and apply them in a Mexicanized way. Not as a pejorative, but to update it with Mexican slang and colloquialisms, oriented towards Mexican audiences, but still exportable. We categorize it as reggaeton-mexa. We’re trying to incorporate those small details to make sure people in Mexico can find themselves in the music.”

“I came up at a time when reggaeton became inescapable.”

BrunOG is also known as one third of MKN Makenna, a sleek indie pop group formed with his sisters Maia and Nina in the infancy of their careers. Though MKN started as a whimsical homegrown family band, it has since evolved into a polished offering that rides the trends of radio-friendly pop music. His role within MKN Makenna is yet another dimension of the young producer’s long list of talents and curiosities. “I recently came out as a singer,” he beams. “I worked on some songs that mixed reggaeton and EDM, which is what I love to do; combining concepts and genres. I also released a mix with Ghetto Kids that was very successful. People are responding very positively to BrunOG as both a singer and producer.”

The Mexico City native’s commitment to his fans extends beyond philosophy and business and into accountability. Of the several confirmed sideshows spawned by Ceremonia’s cancellation on Saturday, his co-headlining party with drummer Madame Gandhi was the only one to survive the festival’s Sunday resurrection. To top it off, he was adamant that the venue hosting the party should not charge a cover, despite the fact that it was packed beyond capacity. He argued it would be disrespectful to fans who had already endured an exhausting day of hardship and disappointment in the implacable sun. The next day, he came out swinging just as hard, closing the festival’s third stage in the same time slot as Björk, with a set that featured a parade of guests as well as his two gorgeous scene-stealing acrobatic dancers. Once again proving blood is thicker than perreo, all on-site access to the golden boy producer was managed by his dad.

Before signing off, the prolific beatmaker made sure to tease a slew of forthcoming collaborations. He also expressed his ambition to gain ground on radio in 2017, saying that if all goes according to plan, 2018 will be the year of BrunOG. As he readied his exit, he offered a gracious handshake and a knowing smirk, slyly remarking, “Se viene durísimo!”