Esty Found Her Happy Place Through Her Own Music
Search
Music
Presented By:

Esty Found Her Happy Place Through Her Own Music

By Marcos Hassan
02.14.22
Photo by Carlos Jaramillo
Presented By:

Esty is making a name for herself by being herself. Her music blends different influences few would think of combining — you’re likely to hear elements of dembow, alternative rock, electronic, and even anime music in her pop songs — delivering music with charisma to spare. Her journey so far hasn’t been easy, yet it has allowed her to elevate her art to new heights, as heard on her forthcoming release, Estyland, an audio representation of her ideal world.

While the Dominican-American singer is driven by her personality and quirks, this was not always the case. Back in 2014, she was poised to become a different artist. After attending a Hollywood music school, she eventually met a producer who had worked with Tyga, molding Esty to become a pop megastar. However, Esty was not convinced, becoming hesitant and sad of a prospective life scrutinized by the media and a career where she would have little say. After releasing an EP—titled Darkroom—she walked away from music altogether.

It took years for her to approach music-making again, eventually picking up a guitar—the first instrument she learned to play—which led to the Cathartic EP, released four years after Darkroom. She ultimately found her sound by fusing pop, dembow, trap, and other styles into her own blend, leading to her breakthrough single “7Heaven,” a song she describes as “an awakening moment […] it showed that I could write something that can make you dance and still say stuff of substance.” Soon other inspired revelatory tracks like “Holy Ghost $$$,” “Mantequilla,” and “Por Ahí” followed. Curiously, she has also found an audience on Tik Tok thanks to her other passion—roller skating.

She is now preparing to drop an EP called Estyland, which is perhaps her most accomplished work to date. Estyland is the result of working closely with producer Kieran Watters, who has had a hand in most of Esty’s recent singles and calls him her “musical soulmate.” Other than the occasional collaborator, Esty doesn’t work with more than one person in the studio. “I like how [Watts] creates,” Esty says to Remezcla. The result is a one-of-a-kind trip.

Written during the pandemic in 2020, Estyland reflects a lot of her feelings about what was happening at the time. The title of the EP stems from a desire to escape. “I notice as an adult that I often just step into another place [mentally],” she says. “Sometimes people could be talking to me, and I’m just like somewhere else. I feel like 2020 kind of made me want to escape reality and build my own world [where] everything is good and happy; [with] cartoons, candy, and all the good stuff in life.” Esty invites us to her ideal world in hopes of giving us a little bit of positivity in our lives. It’s not an escape for the sake of it, though; she describes the songs on Estyland as what she went through the pandemic presented “in a colorful way.”

“Sometimes people could be talking to me, and I’m just like somewhere else. I feel like 2020 kind of made me want to escape reality and build my own world [where] everything is good and happy”

This is illustrated perfectly with “Pegao!!!,” a song about the music industry. Featuring the lyrics “Oye portero / Abre la puerta,” it makes it clear that Esty is not asking for directions anymore. Another track, “Chibi”—which refers to when an anime character becomes small and cuddly—is one of the most forward-thinking in the EP. Collaborating with Dominican producer Mediopicky, they marry the worlds of anime and dembow. “We made a different genre [with ‘Chibi,’]” she tells us. “It’s weird. You hear these anime sounds with the dembow, and it sounds like you’re watching the cartoon.”

“Home,” a single released last November, talks about heavier stuff. She describes it as her recounting where she was mentally during the lockdown, with suicidal thoughts running through her head. “Everything was so shaky,” she says. “Life was more of a roller coaster during that time, and I just didn’t know what the hell was going to happen.” However, she had help from her father, who would talk to her daily from the Dominican Republic to check on her. To immortalize this, she decided to include a recording of his voice in the outro.

Elsewhere, she describes “i4goturbirthday” as “a letter to myself,” she tells us. “I’m telling myself, ‘it’s OK,’ I’m working on something bigger. Of course, I want to be better about remembering birthdays, but I’m on a mission, working on something that’s going to elevate the people around me.” Finally, there’s “Break My Phone,” which is pretty self-explanatory. “We’re addicted to our phones… I’m definitely addicted,” she says. “I want to break my phone because it’s annoying; you catch yourself being on it and wasting time and comparing yourself to other people.”

There’s a heavier Latine influence in the mix listening to the new EP. Always in keeping with her authentic self, Esty incorporated more of these elements in part because of nostalgic reasons, when merengue, salsa, and reggaeton would blast at family functions. “I remember how good it made me feel growing up in New York City and Washington Heights,” she tells us. “My family coming over to celebrate for no reason. Those were the best times of my life. Just being surrounded by family and listening to music with them. All the Latin music. I want to write about things that make me feel good and use genres that make me feel good to make my own thing.”

“I’m standing my ground. This is what I want to do.”

Making music so indebted to her true self, Esty had to learn a lot about herself to get to this level. These have been hard lessons. “I’m learning not to be easily moved to do other stuff,” she says. “As I’ve gotten older, I’ve been more like, ‘no, I’m standing my ground. This is what I want to do.’ I’m open to hearing suggestions, of course, but I feel like when I was younger, I was so gullible and willing to change myself for people. But being independent has definitely pushed me to be myself and find what is authentic to me.”

Another essential aspect for Esty is taking care of herself. She meditates every day and talks to the people she loves. And, of course, there’s roller skating. “Thank God for roller skating!” she exclaims. “That’s my exercise. During the pandemic, the video that went viral, I was roller skating to somebody else’s song. Now I’m able to combine both things. I’m really happy about that.”

In the end, it’s all about chasing a good feeling. “I’m just having fun now. I never had fun writing music when I was in that [previous] situation. Now [I have] an actual outlet for me to express myself, which makes me really happy. I feel like I’m finally in exciting places where I really love what I’ve been making.” 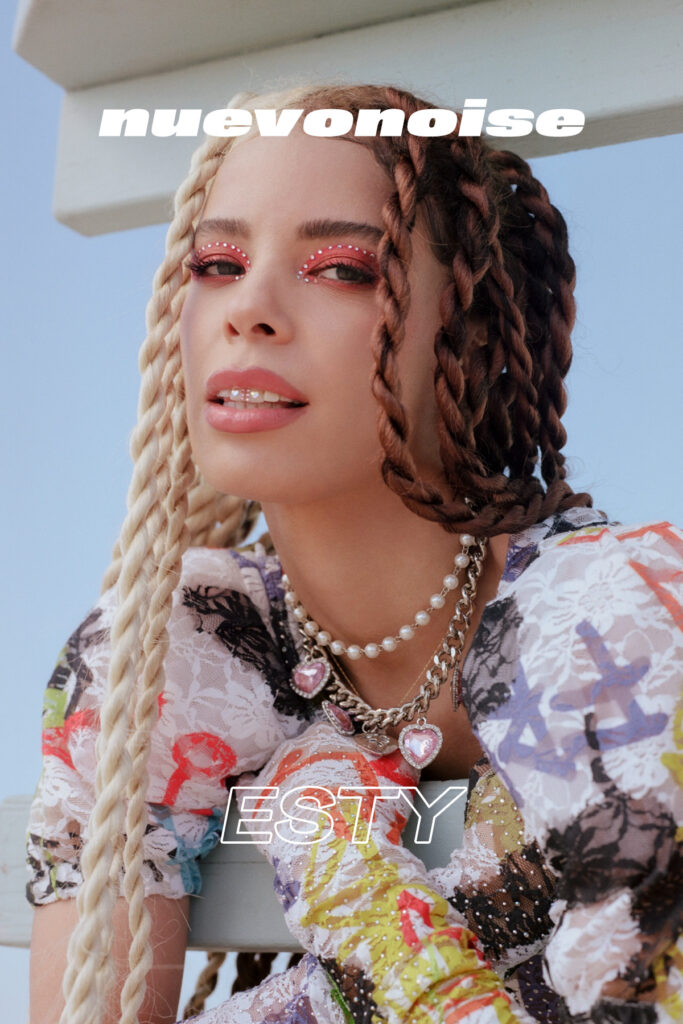