On New Album ‘Singularity,’ Speak Unpacks Our Glorious Modern Hell All Over The Dance Floor

By Richard Villegas
09.12.19
Photo by Alan Lopez for Remezcla

It’s an unusually quiet Monday morning in Mexico City when sitting at a chic cafe in Roma Norte, I notice a rapidly approaching mass of flowing salt and pepper hair. “Man, I’m high-strung today,” is the opening salvo from Antonio David Negrete, better known to fans and Twitter trolls as razor-tongued rapper and producer Speak. In the run-up to his new album, Singularity, out on September 13, the Los Angeles native is feeling the heat of his highly anticipated return to the spotlight after several years of self-imposed, lifesaving exile.

I’m immediately struck by his soft-spoken demeanor – a sharp contrast to the cocky boisterousness of his social media presence. He’s wickedly funny, confident in his work and frequently shouts out industry friends on both sides of the border. Oddly enough, he confesses to being nervous – hardly touching his coffee and obliterating a hapless croissant to crumbs. This duality also lives in the music. Speak’s rapid-fire bars piece together collages of a life in constant conflict – observant, critical and vulnerable. His 2018 album, A Man + His Plants, is an intimate glimpse into the mind of an urban hermit thoughtfully peeling back the layers of his identity from the safety of a San Miguel Chapultepec apartment turned verdant Fortress of Solitude. 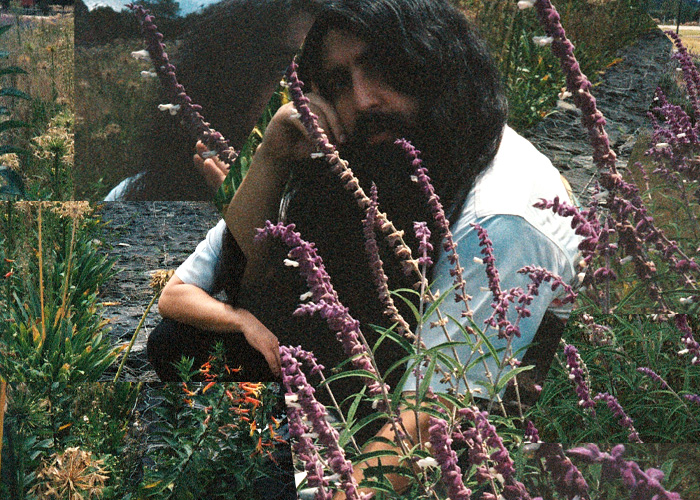 On Singularity, Speak takes his search outside, almost decimated by a world in flames. With NAAFI heavy-hitter Lao at the helm of production duties, Speak turns his anxious ruminations into a cathartic rave, digging into toxic masculinity (“Desperado,” featuring Yoga Fire), the perpetual excess of Mexico City night life (“Strobes,” featuring Paul Marmota) and the illusion of freedom under capitalism (“Extra Expectations”). Singularity is hypnotic and debauched, but also a coming-out party of sorts. Where A Man + His Plants presented an artist searching for answers and inner peace, Singularity shows us that artist reborn, holding a half-full bottle of mezcal and ready to fight.

Born in East LA, and raised in the idle of Inland Empire, Negrete’s childhood and teenage years were largely shaped by curiosity and his parent’s protective instincts. “There’s no falsehoods with me,” he says with a self-aware smirk. “I’m thug-adjacent. While my friends and family were in crazy shit, I was the fucking nerd that wanted to skateboard and smoke weed and read comic books and play on the computer and listen to rap.”

After high school, Negrete returned to the metropolis that birthed him – couch surfing and living off junk food to keep the artist dream afloat. Most nourishing of all was the creative ecosystem flourishing around him. “I used to take the No. 7 bus down to the transfer station to then hop another bus over to Syd Tha Kid’s house and record,” he reminisces. “That’s how I became friends with Syd, the Odd Future crew, Vince Staples and worked on the first Internet project. It was a lot of chaos – both a time of uncertainty and brokenness that also felt like anything was possible.” 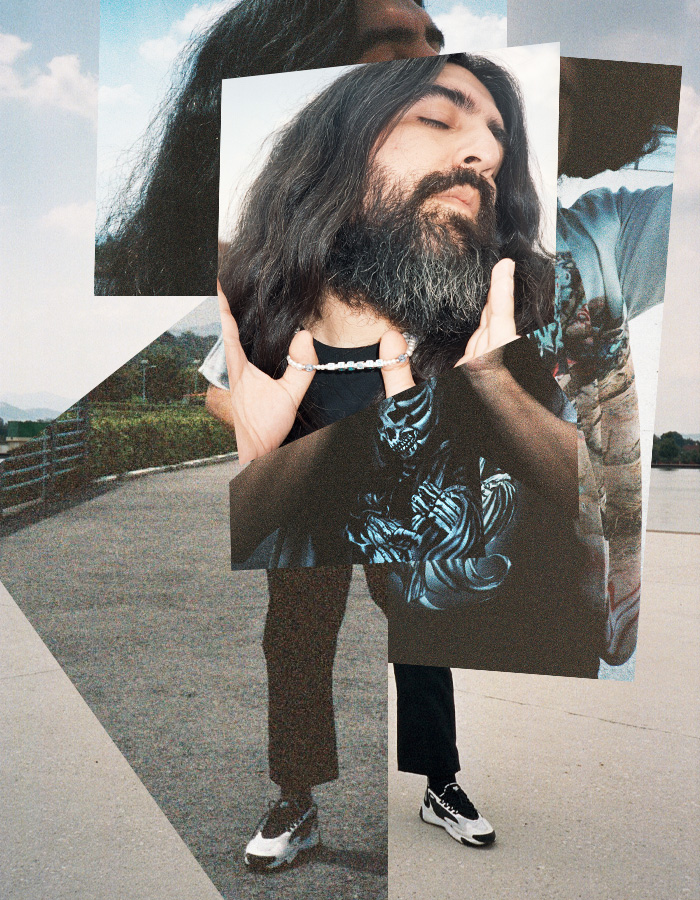 While working on his own mixtapes, Negrete’s first taste of tangible success came after cowriting Kreayshawn’s hit 2011 single “Gucci, Gucci,” putting him on the radar of labels and producers who began inviting him to in-studio writing workshops. “I saw through that shit real quick,” he adds. “I’m living in LA, dead broke, and you want me to take a $20 Uber to the studio for a 10-hour unpaid writing session, and then Uber my ass back to whatever couch I’m sleeping on? Get the fuck out of here!”

Negrete remembers this time with weary fondness. While the dynamic grind of his artistic infancy kept him stimulated, the excessive partying that came with it soon became dangerously consuming. “I was spinning out of control,” he says, “and it dawned on me that maybe I had to remove myself from that environment because I wasn’t happy.” In late 2015, Negrete packed his bags and withdrew to Mexico City looking to regroup and detox, uncertain if he would ever make music again.

A small but solid network of local friends and acquaintances cushioned Negrete’s initial transition. Past gigs introduced him to buzzy Mexican tastemakers like Los Blenders and the NAAFI collective, the latter of which showed him the ropes of Mexico City’s vibrant night life. After a year of rest, exploring the city and connecting with distant family, the creative itch returned and along with some buddies he began producing a monthly hip-hop party called Down In The DF over at the American Legion.

Negrete is also acutely aware of the charmed yet isolated life US and European expats are able to enjoy in a city Vice once called “the new Berlin” and actively counteracts jarring gringo aloofness by investing back into the local arts scene. Singularity is being released via Sony sub-label Steak Worldwide, with most of the allotted budget poured into securing Lao’s highly sought production skills, mixing and mastering at the prestigious Panoram Studios and developing the album’s avant-garde visuals, which are shot by Melissa Lunar. He even jokes the album’s original title was This Shit Expensive, also describing the surreal and sometimes hilarious process of pitching potential collaborators on an “Apocalyptic, Latin American, futuristic club/rap hybrid.” 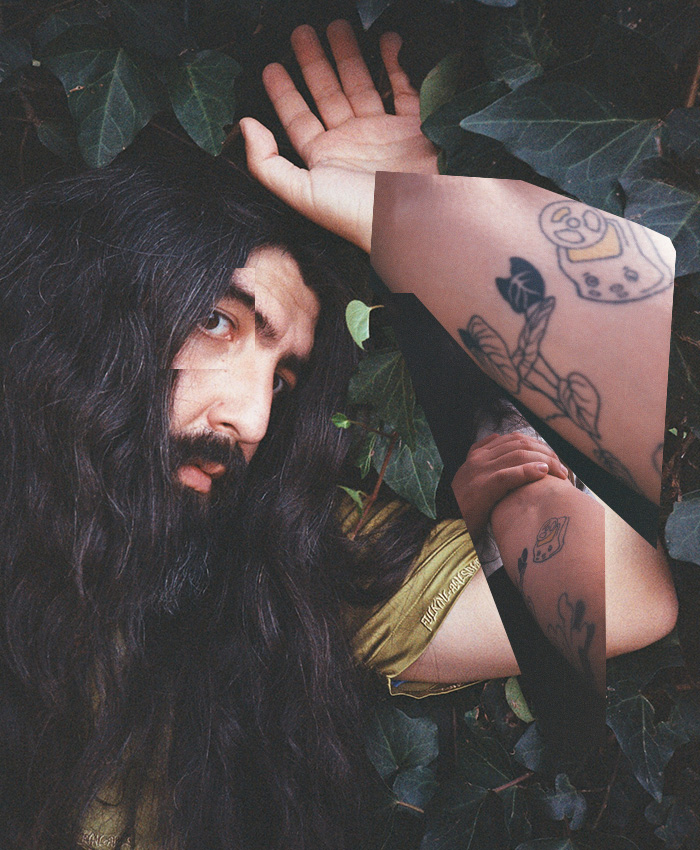 Negrete’s binational existence over the past four years has greatly enriched his artistic voice, giving Speak releases a much more robust worldview. On the incandescent “Al Cien,” which features rising NAAFI signees ForyFive, we dip back into Speak’s history of excess, hearkening to his nimble, drugged addled 2010-self and boasting, “recibo amor en cada escena.” Album opener “Moving Units” offers a far more sober perspective, with Speak overwhelmed by living in a society where racism, murder and environmental cataclysm have been normalized, contrasting a sense of impending doom against a city where narcos and ballroom queens coexist in surprising harmony.

“Everyone is busting their ass to get by,” he says, pondering the balance of dark themes and club beats across Singularity. “[Mexico City] can chew you up and spit you out. Shit sucks. It’s raining constantly. So what do we do on the quincena? We go to the club and dance all fucking night. That’s the release. So it’s a collision of a harsh reality and trying to find some kind of escape.”

Ironically, Speak’s finest example of Matrix-dismantling astuteness is not even available for download. Last year, during an appearance on Power 106’s LA Leakers, the rapper was invited to perform a freestyle that has since gone viral. Sending love to everyone from NAAFI co-founder Mexican Jihaad to OXXO loiterers, and attacking everything from Immigration and Customs Enforcement (ICE) raids to his disappointment in Kanye West – the clip frames Speak as a performer no longer interested in meeting our artistic expectations.

“I don’t have to bend to anyone’s idea of what a rapper should be,” he adds. “Even beating my face for these photos, it’s an ode to a part of my life and to the queer experience. We go to Traición, and we kiss boys and we kiss girls. It’s known about me, but it’s about embracing it openly.”

As our conversation winds down, the duality of Negrete’s tangled inner world and Speak’s larger than life bravado once again comes to the foreground. “I’m still searching for answers and truth,” he offers, tentatively. “I‘m not the woke king. I’m not the prince of CDMX. I don’t run LA. I’m not the voice for queer identity. I’m just trying to be truthful and happen to be a lot of things mixed up in one vessel. I don’t want the kids who are listening to the songs to put me in this idealized role model position. I’m just trying my best not to let you guys down.”

Honestly, what more could we ask for?

Singularity is out on September 13 with a special performance at Brooklyn’s Market Hotel on Friday, September 20.