Op-Ed: Why Urbano Artists' Scarce Comments on the #BLM Movement Are a Problem
Search
Music

Op-Ed: Why Urbano Artists’ Scarce Comments on the #BLM Movement Are a Problem

By Katelina Eccleston
06.03.20
Art by Stephany Torres for Remezcla

Anger stemming from systemic racism, mass incarceration and police brutality is part of the everyday reality for the Black community in the United States. But George Floyd’s murder at the hands of police in Minneapolis was the final breaking point.

While many (though not nearly enough) artists and celebrities with large followings quickly condemned the travesty and admonished the officers involved, the sound of silence resonated across one of the genres most indebted to Black music and culture: música urbana.

Over the span of decades, the world has witnessed the very public display of anger over injustices, often expressed through music. Hip-hop icons like N.W.A, pioneers of underground in Puerto Rico and the likes of El General during the post-military state in Panama all had something to say about abuses by the powers that be.

Music as a means of survival for Black communities stems back to slavery. It inspires hope, resilience and the spiritual means to get through some of the most impossibly racist times in history.

Save for a few posts, we painfully bore witness to some of our favorite urbano artists spreading messages that have misinformed, insulted and diverted the attention from the optimal message: Black Lives Matter.

Black Lives Matter protests began in the streets of Minneapolis on May 27 following the death of George Floyd. In the span of hours, other states joined to amplify the message. Celebrities like Barack Obama, Beyonce, Lizzo and a handful of others used their platforms in solidarity to spread information and highlight the reality of our racially tense circumstances. As time progressed, it became alarmingly apparent that urbano artists were overwhelmingly silent.

Urbano began when “chombos” like Nando Boom and El General of Panama decided to sing reggae in Spanish despite strong socio-political opposition. The tradition then rippled throughout the Caribbean. Despite the rebellious efforts of the pioneers of reggae en español and Afro-Boricua’s evolution to reggaetón in the early 2000s, blanqueamiento proved itself the most defining element of urbano’s success. But what did that mean for the aesthetics and symbolism that is iconic to the imagery of this popular and forever evolving sound? It remained prevalent but its “costume” was reassigned to what is described as a more popular collective of Latinx artists, the majority of them light skinned or white.

In the days following Floyd’s murder, few if any urbano artists voiced any concerns about Black lives, save for one poignant post by Daddy Yankee. That’s not to say that the litmus test for support of a community should be their contribution to one’s art—it should be basic humanity 101—but given urbano’s massive connection to Black and Afro-diasporic sounds, it should have come as a siren song from the very artists who have amassed wealth in a genre that was built on the backs of Black artists.

And it’s not like urbano artists are afraid to speak up when bothered. Bad Bunny has continually used his platform to talk about issues like homophobia, violence against trans people, violence against women and corruption in Puerto Rico. But his voice has been noticeably silent this time.

Just last year, the single most passionate and united front urbano artists came together for in recent history was during the calling out of the exclusion of reggaetón as an official Latin Grammys category. But it was a surface-level call-out. What reggaetóneros failed to ask then was, “Why is reggaetón not wanted?” And the simple answer stems back to the genre’s “urban” and “Black” roots—a stigma the recording academy is still uncomfortable with, even if the genre’s faces are now mostly white.

Black music and Black fashion aesthetics go hand in hand, and naturally they are embedded in urbano as well. From instrumentation influenced by reggae and dancehall, hip-hop, Bomba and many others in conjunction to hip-hop fashion which includes luxurious bling, extravagant kicks and ebonics, it became the staple image for our favorite urbano artists. Black without actual Black people may not fully be the fault of actual artists, but often the industry that plays a significant role in keeping this outdated cycle alive. In any case, the assumption of Black aesthetics includes the role of the most basic fundamentals of Black music, taking a stance and speaking up against racial injustices.

While Reggaetón is largely pop, it is derived from Black music and Black people. The rise of Daddy Yankee’s Gasolina generated the recognition urbano needed in order to establish the bridge of Pan-Latino music in the U.S. El Cangri’s success is due in part to the large number of collaborations with Black rappers he’s done over the years, bridging the gap between the language barrier and proving the universality that urban music really is.

“Within many of my blood brothers are African-Americans who I care about and whose work I admire—I’ve had the blessing of working with them. RESPECT! #blacklivesmatter” Daddy Yankee included in his recent Instagram caption. El Cangri’s career consists of the notorious fascination with “crossing over” into the American markets that initiated a domino effect of opportunities for urbano artists after him.

In a lengthy Instagram post, Becky G exclaimed, “…I urge you all to consider who you are offline and what else we can do, to not just place bandaids on gunshot wounds. To those who are not talking about this with friends, family, fans – YOU are part of the systemic problem…”

In her post, She managed to encapsulate almost every aspect of the silence threatening the livelihoods of members of the Black community. This is something that is not easy to accomplish as it requires education and reiteration.

But save for a few posts, we painfully bore witness to some of our favorite urbano artists spreading messages that misinformed, insulted and diverted the attention from the optimal message: Black Lives Matter. It became apparent that some artists had no understanding of the politics at play. From comparisons of Black people to nonhuman objects like dogs, cars and tokenism displayed in dancing with that “one black friend”—it’s evident that education on the language necessary to combat injustice has been lacking. 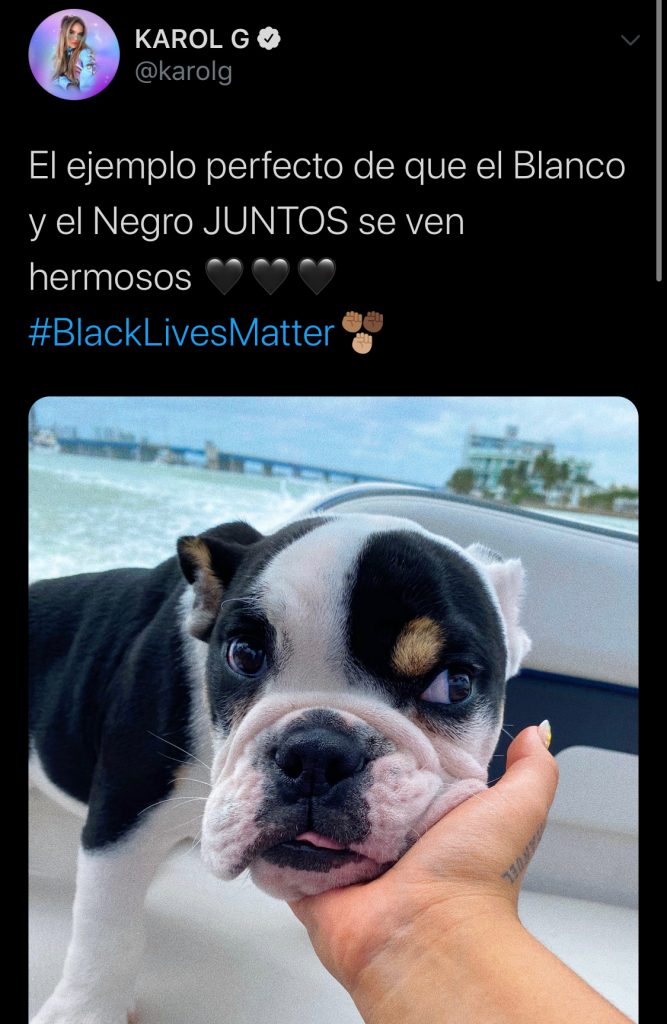 The juxtaposition of race in the U.S. in conjunction to that of every individual Latin American country has repeatedly been proven to cause agitation in the Pan-African conversation, including clashes both in the Afro-diasporic dichotomy of Afro-Latinos and African-Americans, as well as within the Latinx community as a whole. Confronting the exploitation of symbols inspired to combat racist issues forced artists to move either towards or away from ‘la causa’ further contributing to its blanqueamiento. Essentially it is unlikely that there isn’t any aspect of urbano that does not reflect a sort of lineage to Blackness, it is in its DNA.

A common mistake made by Latinx is the dissociation of these issues due to nationalistic attitudes that contribute to the erasure of Afrodiasporic injustices. Due to phenotypes such as “pelo crespo” and dark skin, Afro-Latinx who are Negrxs do not have the luxury of staying silent because it is a part of their means of survival as well. They’re not capable of separating their negritud from their Latinidad. It is for this reason that Black Latinos are included in the statistics reflecting the Black Americans who are racially profiled and mass incarcerated. The constant education of the effects of systemic racism, mass incarceration and white privilege, or lack thereof are especially important during these profound moments in history and are critical for the advancement of Black people.

Latinidad’s proximity to whiteness has always been a deterrent to this advancement, and has contributed greatly to the silencing of those who have succeeded in predominantly white spaces by the skin of their teeth. As the market grows and urbano proves itself as a force to be reckoned with monetarily, it is crucial that the inhibitors of Black aesthetics use their platforms to pass the mic, if not to raise their own voices.

He said I got one in the archives for this one ☝ pic.twitter.com/SmXxnNO4Ma

There are two pandemics occurring in the U.S., the Coronavirus and police brutality. On May 25, 2020 George Floyd was murdered by asphyxiation by Derek Chauvin. It was the tip of the iceberg for Black Americans, and Black people all over the world, as fearing for their lives has always been a part of their everyday reality considering they make up 13% of the population yet are 2.5 times more likely to be fatally shot by the police.

Urbano artists—especially those who aren’t Black— have a duty to speak up on behalf of racial injustice outside of when it’s trendy. It’s not only a crucial means of compensating for the exploitation of Black aesthetics, but an element of solidarity of the advancement towards racial equality in the U.S., Latin America and as far as their influence reaches. For many that includes millions of people across countries all over the world.

When artists like J Balvin—who is undoubtedly one of the biggest artists on the planet— double down on their snafus by admonishing fans for “not teaching them,” in a moment when they should simply listen, it speaks to level of entitlement they feel.

And though we are now starting to see a damage control blitz by these artists and their teams, maybe the answer lies outside of making hurried statements. Maybe it’s time they open their wallets, pass the mic, listen closely and ultimately, do better.