Photo courtesy of the Sundance Institute

Each year, Red Bull Music Academy Festival brings artists from across the globe to New York with the goal of exploring music and music culture through listening sessions, discussions, and dance parties. This year’s festival is kicking off on April 29, and it’s bound to include plenty of emerging genres, up-and-coming artists, and thought-provoking conversations. We’ve assembled a few of this year’s best events for all your festival planning needs.

To kick off the festival this year, RBMA will host a NYC premiere of the award-winning documentary profile KIKI by Swedish director Sara Jordenö and protagonist Twiggy Pucci Garçon. With Black Lives Matter activism and anti-trans legislation as the backdrop, the movie (and special performance following the screening) come at an urgent moment, when issues of identity, visibility, and justice are at the forefront of the conversation for LGBTQ youth of color. Two weeks ago, North Carolina passed a law criminalizing trans people by requiring them to choose public restrooms according to their biological gender; the law also attacks LGBTQ people’s right to file civil discrimination lawsuits.

Public support and outrage make it clear that although same sex marriage is now legal, gender-based discrimination still exists in the workforce, in public, and in the home. For trans and queer people of color, there’s also the reality of living in communities with police violence, high incarceration rates, and homelessness. KIKI, which echoes Paris is Burning in its exploration of a “society within a society” through transformative art, offers the critical space to reflect on our current society and the ways in which queer communities of color continue to resist.

In the 80s, New York City and Miami saw the emergence of freestyle, a Latino hip-hop fusion that pulled together novela-type lyrics with new electronic sounds: futuristic synths, machine-gun stutters, lasers, and 808 beats. At its peak, the genre was an important cultural moment for young, English-speaking Latinos – a way to wallow in the drama of young love, heartbreaks, and desire with hits that eventually dominated radio airwaves and nightclubs across the country. On May 13, two of freestyle’s leading producers, Louie Vega of The Devil’s Nest and Jellybean Benitez of The Funhouse, will be coming together to pay homage to the genre that united so many Latinos.

In an unexpected yet totally logical move, Mexico City-based collective NAAFI recently paired up with Africa’s NON Records to create the NON vs N.A.A.F.I mixtape. The mix, which brought together artists from both regions in a 45-minute experimental soundscape, has spawned a collaborative, genre-busting dance party on May 20. The event will make space for many of the collective’s bass-heavy, provocative artists, including Elysia Crampton, Rabit, Gaika, SCRAATCH, LAO, and Mexican Jihad, who have been dominating clubs in DF and beyond for years. 2015 in particular was busy for the collective; they launched a residency at Mexico City’s Jumex Museum, released new music and a video last month, and embarked on their first European tour. Fresh off of their SXSW showcases, this will be an opportunity to experience the striking collaborative energy of the two groups, as well as N.A.A.F.I. in its maturity.

In 1971, Grammy award-winning artist Eddie Palmieri released Harlem River Drive. The record’s blend of Afro-Cuban rhythms, funk, hip-hop, and soul music and stellar lineup of local artists – including his brother Charlie and Bernard “Pretty” Purdie – helped garner the iconic status it boasts today. The record is a testament to Palmieri’s commitment to social justice; that same year, the group broke into Sing Sing Correctional Facility and performed for inmates, with the aim of subverting dominant narratives about incarceration and policing. The project was just one instance of Palmieri’s long-lasting political influence. Forty-five years later, this free outdoor concert will highlight Palmieri and the continued struggles of the communities of color who live in his native South Bronx.

Last Night a DJ Saved My Soul will bring together a diverse group of DJs to help forge the deep connections between house and gospel and the emotional and spiritual experience of each genre. Over the past few years, a new take on these sounds has emerged, with the influence of a diverse array of Latino artists making neo-soul with deep gospel roots. From the tracks of Gabriel Garzón-Montano and Kali Uchis, the long-lasting effect of classical gospel and soul is more striking than ever. The diverse lineup includes Ann Newby, former lead singer of Sounds of Blackness, Phuture’s acid house pioneer DJ Pierre and “King of Gospel House” Kenny Bobien, who will come together to create a space for a visceral, spiritual dance party.

TRAILER: 'We Like It Like That' Tells the Story of the Birth of Boogaloo, a Mashup of Mambo and Soul 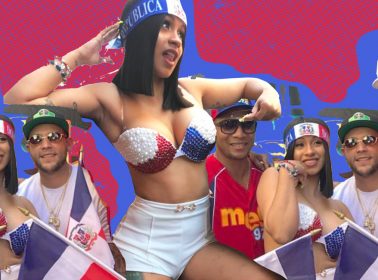