On May 10, French-Ecuadorian electronic music artist Nicola Cruz is returning to NYC, this time to play his largest show yet. After becoming the first artist to ever play and sell out each of the three rooms in Brooklyn venue Elsewhere – all in 2018 – the “Colibria” producer is coming back to please the growing number of people hungry for that delicious Andes-step sound. This time, he’ll be in a larger venue: Queens’ Knockdown Center.

After spending his 2018 restlessly touring the world, Cruz doesn’t seem to be slowing down any time soon. He kicked off his year with live dates in Latin America and Europe –including a spot in Barcelona’s Sónar Festival 2019 – in anticipation of his forthcoming album Siku, out on January 25 through Buenos Aires imprint ZZK.  On the album, he expands his exploration of traditional and organic sounds from Latin America to the whole world, with the help of a cast of musicians from Brazil, Portugal, Colombia, and Chile. This is found all over his two latest singles, the flute-and-drums combo “Arka” and the sitar-led dance track “Siete.” 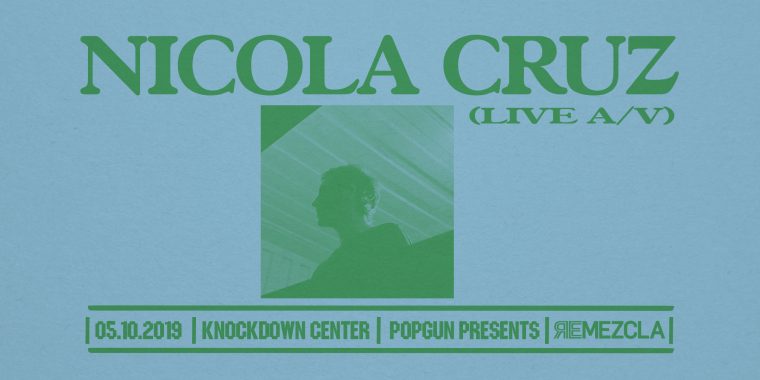 After witnessing Cruz’s outstanding success at Elsewhere, Rami Haykal and Jake Rosenthal – the masterminds behind venue collective and events production house PopGun Presents – are putting him back on an NYC stage. Get ready to meet the world and sounds of Siku through one of Cruz’s signature live shows, where he transports the audience into a vivid dream that brings the natural world inside to the dance floor, where it coexists with electronic sounds in perfect harmony.

Nicola Cruz is performing at The Knockdown Center in Queens on May 10. Tickets are on sale now.

We have some tickets to give away, so enter below for a chance to be part of this epic night.