By Isabelia Herrera
08.14.18
Photo by Melissa Sáenz Gordon for Remezcla

Atlanta’s Latinx community is resilient. In the face of growing tension and fear around immigration and gentrification, it’s clear that the city’s Latinx residents are determined to create their own cultural movements, even as local governments overlook the crises shaping daily life in the metropolis.

That’s what makes projects like Oye Fest so imperative. In its inaugural year, the three-day Latinx arts and culture festival set out to celebrate the city’s cultural endeavors with a series of concerts, panels, and art shows this past weekend, highlighting both the activism and independent enterprises blossoming all over the city.

And it’s clear that there’s talent to spare. On the first day of the festival, hordes of photographers and art kids streamed into The Gallery at Wish to check out the work of visual artists Martin Ferreyra and Pablo Gnecco, proof of the hunger there is for spaces that uplift the Latinx community. On Saturday, a panel on Latinx identity in 2018 highlighted how Atlanta’s residents are part of a larger national crisis about immigration, and the intimacy of the event proved that these conversations, however small, are paramount for community building. And when Chicano bedroom pop star Cuco hosted a pop-up shop and meet & greet on the closing day of the festival, hundreds of second-generation kids lined up around the block.

As a pioneering space, Oye Fest inevitably faces some challenges. Unlike other big cities, many of Atlanta’s Latinx residents are spread out and often isolated from the city center. When there’s no dedicated spaces for the Latinx community, it can be hard to draw people out to events. But that intimacy is foundational, and can be just as influential as high attendance. Either way, the conversations that Oye Fest is sparking deserve visibility on a larger scale in the city.

We talked to Atlanta residents about local politics and the future of the city’s Latinx music and culture scenes. Check out what they had to say below.

These interviews have been edited and condensed for clarity.

“When I first came to Atlanta [eight years ago], I felt like I didn’t see very many other brown or Chicano folks. I saw some immigrant folks in the small area where I lived in, but mostly people are located 30 minutes outside of here…it’s a different vibe to see a lot of people your age that are [Latinx] and I wanted to support this.

Immigration and folks getting picked up is fucking real here. When we first moved to the area where we’re living at, which is a historically Black neighborhood, there were checkpoints. There’s an Atlanta city jail that holds undocumented people and it’s an ongoing [crisis]. Immigration shit is real; fucking gentrification is real. The prices have gone up and people are getting pushed out. Again, the part of town that I’m in is mostly Black and there’s a couple of pockets of – you can tell gente lives there. The city doesn’t give a fuck about it. You see folks and you see how people struggle.

I remember learning about Kap G a few years back and I was like, “Whoa, what?” I’m a fan of trap music, and to see another Mexican doing trap, Southern style, I was just like, “This is really the crux, the intersection of some of these things.” That’s the crux of what it’s like to be brown and in the South.

I hope that [this music scene] continues to exist and be around and I hope that it builds with the Black community here as well. Because I don’t want us and the growth in Latinx community to mean that we’re part of the gentrification, right? Historically Black people get pushed out. Brown folks sometimes get brought in and then we get pushed out by white people also. I just hope that as a community, individually, and institutions like Oye Fest build and do things in a way that we’re still in a community and uplifting folks here also. Because I think it’s part of a larger political agenda – building together to fight back.” 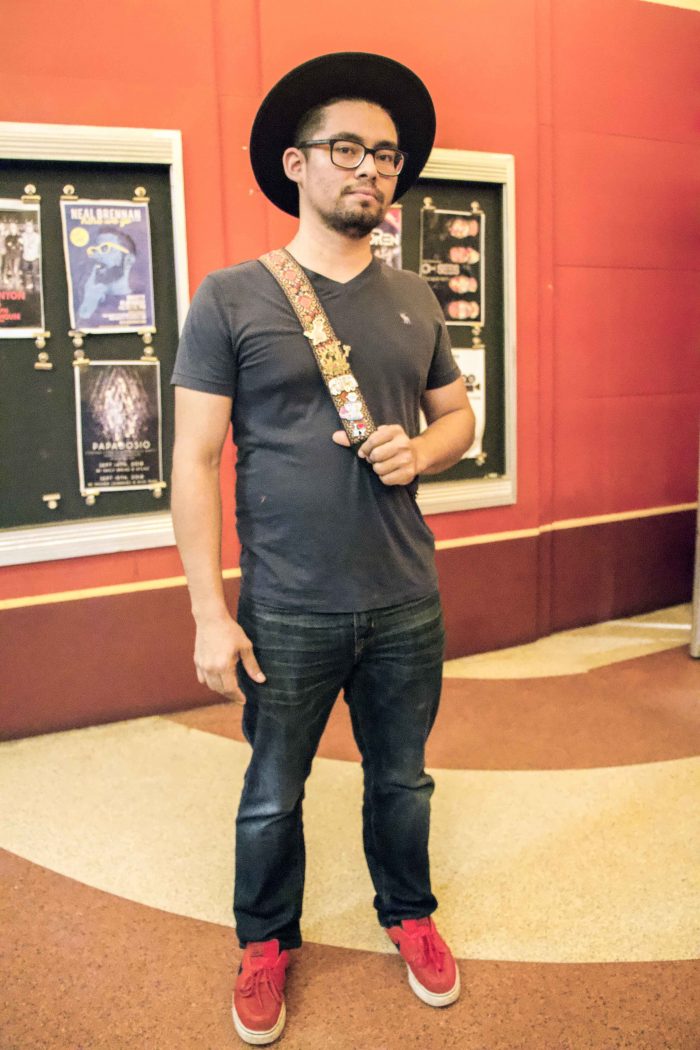 I think the biggest issue here in Georgia is the whole DACA situation. That’s been a big controversy, trying to make sure that everybody gets what they deserve. We’ve been here, we contribute – it at the very least recognizes us as human beings, as part of this country. Marco Palma, he’s involved in the community; he’s the president of Los Vecinos de Buford Highway. He’s been involved in the community and he has so many people that are trying to push and make sure that DACA stays alive.

I’m just wanting to get the equivalent of Migos. I know there’s someone out there right now working hard in the music industry, in the arts scene, who needs the same recognition. Because Atlanta’s got talent all the way around.”

Speaking on a broad spectrum, just the thought that our president has expressed and created these policies and ideas against immigrants from Latin America, that already changes the way people react to hearing Spanish in public. There’s no better time to yell into a microphone in Spanish than right now. The idea of [singing in Spanish] is growing and spreading, and that’s the only way for the Atlanta community to actually become more lush with Latin American artists that are not afraid of speaking in Spanish to a crowd of white people.

It feels like a seed that’s being planted in Atlanta because there hasn’t really been anything like Oye Fest or any sort of Latinx festival like this, so for me it feels like the beginning of something, where it’s not only good for people that want to come and see Spanish-speaking artists or Latinx or Latin American artists, but inspire artists also to express themselves in their language and express how they feel about their culture, whether they’re confused about it or whether they feel grounded [in their] roots. Scenes have their way of [becoming] a community and playing this type of music and helping each other out, and that’s cool, but [growing up] there weren’t Spanish-speaking artists that I was looking up to in Atlanta or anything like that. It still has a lot of space to grow.”

“We need more Latinx spaces where we can express ourselves and have people who look like us – who have similar struggles in the Latino community in Atlanta.

One [Latinx space] that I love is La Choloteca, which started recently and it has been such a great space where we can be free. [There’s a] multi-generational vibe and so that’s the only one that I think many people feel like can they identify with – they feel really comfortable being in those spaces and owning those spaces too. I think more recently I’ve seen more spaces opening up and people feeling unapologetic about owning those spaces.

With the current political climate, you’re seeing a lot of fear around race and people being deported and being in prison, so there’s this fear in the community, definitely, and especially the community that I work with, you can see that people are being very mindful of going to go out into the streets because it’s a very conservative state and Republicans are chasing us.

In some counties up north, the Latino population might be the second largest ethnic group, but still there aren’t many services provided to the community, and also the way the police interact with people can be very rough, and you see a lot of racism.”

Now with the climate we’re living in, I think it’s important to be more politically active, to engage, to be involved in what is happening. I also see that there are communities that help each other, like the Latin America Association, or the community in Buford Highway, where they’re mobilizing, but I don’t think everyone wants to be visible right now in that way. I see groups supporting DACA recipients, or people who want to change their status have the opportunity to apply for their residency. But I do see a lot of tension [and fear].

Atlanta is a perfect city. A lot of entertainment, culture, and music develops here – there’s a long musical history here. I’d like to see more events like this and also spaces where you can hear different styles of Latin American music – where we can unite.”

“When I came to Georgia for the first time in my life – Morrow, Georgia, on the south side – there was already a big Panamanian community. Not here in Atlanta, but outside of Atlanta, like a lot of the Latin communities are. But I’ve got dreads; I’m Black; I got a grill in my mouth, you know what I’m saying? They always attack me [for speaking Spanish]. It’s something I’m used to, unfortunately.

I was also undocumented for awhile. I’m Panamanian, so we aren’t born with papers. Fuerza mi gente latinoamericana. I want to see everyone grow, but we also have to understand that maybe the answer isn’t the United States. Maybe we should start looking fucking somewhere else. Fuck ‘em. Maybe we should bring our talent somewhere else.

With the trap movement going crazy, it’s just a matter of time until Latinos from here, from Atlanta, start making music and repping this shit. Especially living here in Atlanta and seeing my friends that are hitting it out the park in English with the whole trap movement. And then turning around and the no. 1 song in Italy is trap and the no. 1 song in Latin America is trap. It’s like, what? This shit is the trap capital.

I’m Panamanian; reggaeton runs through my veins, reggae en español runs through my veins. And growing up in the U.S., of course I fell in love with hip-hop. I’m a mix of everything. It’s hard, man, it’s hard trying to pave something that doesn’t exist. Because it requires more effort, more time.”

“There are very few spaces that are friendly and especially made for Latinx people in this city. In cities and states that have bigger support, where a lot of the people are Latinx, I think it’s a different mentality. I grew up in Gwinnett. I grew up with kids telling me how much they hate immigrants and their parents are immigrants. Not because they’re bad people, but because they heard it from their parents, you know? That’s the difference with growing up somewhere like here, is that we’re really isolated from each other. There’s not this one central point where we can belong, which is why these events are so important. Because it creates this central point where we know we’re welcome and we can be however we are.

The art scene and the design scene is mostly white dudes. In a city like Atlanta, if we’re not careful, the Latinx population gets forgotten really easily.

I would love to see a dedicated space [for the Latinx community]. So it’s not just like we’re going into these spaces and taking over for the night, but it’s like, this is the space where we can hang out. Even if it’s a small space. I think it makes a big difference.”