By Ecleen Luzmila Caraballo
08.20.19
Fans at the "Selena for Sanctuary" concert held at New York City’s SummerStage in Central Park. Photo by Roy Baizan for Remezcla

The crowd glistened under the blistering blue light of the “F*CK ICE” projection that served as the backdrop to Kali Uchis’ evening closer. Bathed in New York’s relentless summer rain, a mostly unfazed crowd of more than 5,000 gathered in the middle of Central Park to remember reina Selena, belt her timeless lyrics and support immigrant organization Make the Road, whilst gathering in a safe space for Latinx immigrants and allies to freely and proudly leave surrounding marble floor-filled homes shook.

“This is beyond my wildest dreams,” Doris Muñoz professed to wide-eyed sea of people staring back at her ahead of the night’s set. “We deserve a moment of joy.”

Soon-to-be-official 501(c)(3) nonprofit Solidarity for Sanctuary has spent the last three years preparing for this moment. But the one thing you seldom do (and never want to have to) prepare for is inclement weather.

Doors were set to open at 6:30 p.m. on Sunday, which on a typical summer night, meant the sun would presumably start tucking itself in right on time for a cotton candy-glow to linger behind this year’s 8 p.m. opening act at Summerstage. Instead, the chance of rain very rudely leapt from 15 to 100 percent just hours prior to the start of show, leading to a domino effect of unexpected issues – a massive delay in entries being the most flustering, and cut of the show’s run time the most tragic. Yet, you wouldn’t know from the hundreds of beautiful brown faces humming and singing along to Helado Negro’s “Pais Nublado,” nor the air of serenity carried by most backstage. “When there’s a purpose for what you’re doing, there’s a different energy about it,” Ana Villafañe told the crowd. The Broadway star, most notable for portraying Gloria Estefan in On My Feet, was one of the eight acts of the night.

Solidarity for Sanctuary was birthed as Muñoz’s love child in 2017. It was initially solely an effort to raise money to cover her family’s legal fees on the path towards citizenship. Muñoz, the only natural-born citizen in her family, was on the brink of building her personal dreams of establishing a music management company (now Mija Mgmt) when that first concert took place in Los Angeles, raising well past the needed $6,000. Three years and nine shows later, Muñoz and her ever-expanding team have helped many other families and partnered with organizations like Make the Road NY, Kids of Immigrants and Voto Latino to further extend their impact. Meanwhile, she’s taken five artists under her managerial wing – one being the freshly signed, homely Cuco.

Tasked with singing two of the Queen of Tejano’s most well-known songs, the 21-year-old’s amygdala appeared to have momentarily floated away from his body during “Amor Prohibido.” After what Cuco attributed to a bit of a “brain fart,” Chris Pérez, Selena’s widower and supremely talented guitarist, generously helped him swim his way back to shore with the lively “Bidi Bidi Bom Bom.” Cuco’s enviably loyal fanbase in attendance continued to chant his name throughout the night for an encore that never came.

Other young acts, like that of 17-year-old IV Jay and 18-year-old Mexican-Dominican powerhouse Ambar Lucid, flaunted refined yet ease-filled performances. Though the songs were birthed before their time, you wouldn’t know from their passionate interpretations. Lucid sang the classic “Techno Cumbia” with an added tinge of rock influences for a stage show that was impossible not to move to.

Before the lawn was filled, the looming gray clouds overhead wept without respite, until finally giving in at the sound of the night’s first guitar strum. “You made the rain go away,” Roberto Carlos Lange, best known as Helado Negro, smiled at the wave of people filing into the lawn. The breezy, melodic indie artist added his exceptionally curative, airy flair to Selena’s “Tú Solo Tú,” and “Baila Conmigo” in a dulcet duet with promising artist La Doña.

A month off of his This Is How You Smile tour, Lange didn’t hesitate to add his name to the S4S ticket. He recalled telling Muñoz, “If I’m in town, I’m down. There’s nothing that I need other than to be asked. And if I can, I will.” The Brooklyn-based artist is adamant about our stories being told through a more holistic lens, and always down to support a good cause. Sunday night – and events like it – he said, are more about our shared experience than they are about our differences.

In the last few weeks alone, there have been several hate-fueled attack attempts following the horrific shooting in El Paso that left 22 dead, as well as ICE raids that left children stranded on the first day of school. U.S. air is tinted with pain, anxiety, and an ever-so-slight, yet pungent whiff of fear – particularly in our undocumented communities.

“The people who these things are happening to need to have these moments of joy and celebration of culture and life,” Lange said on the significance of music in moments like these. A study that dates back to 1980 (which is coincidentally the year Quintanilla started preparing to make her recording debut) supports his theory. The thrill caused by music is superior to that elicited by physical exercise, reading, success in a competitive endeavor and even sex. 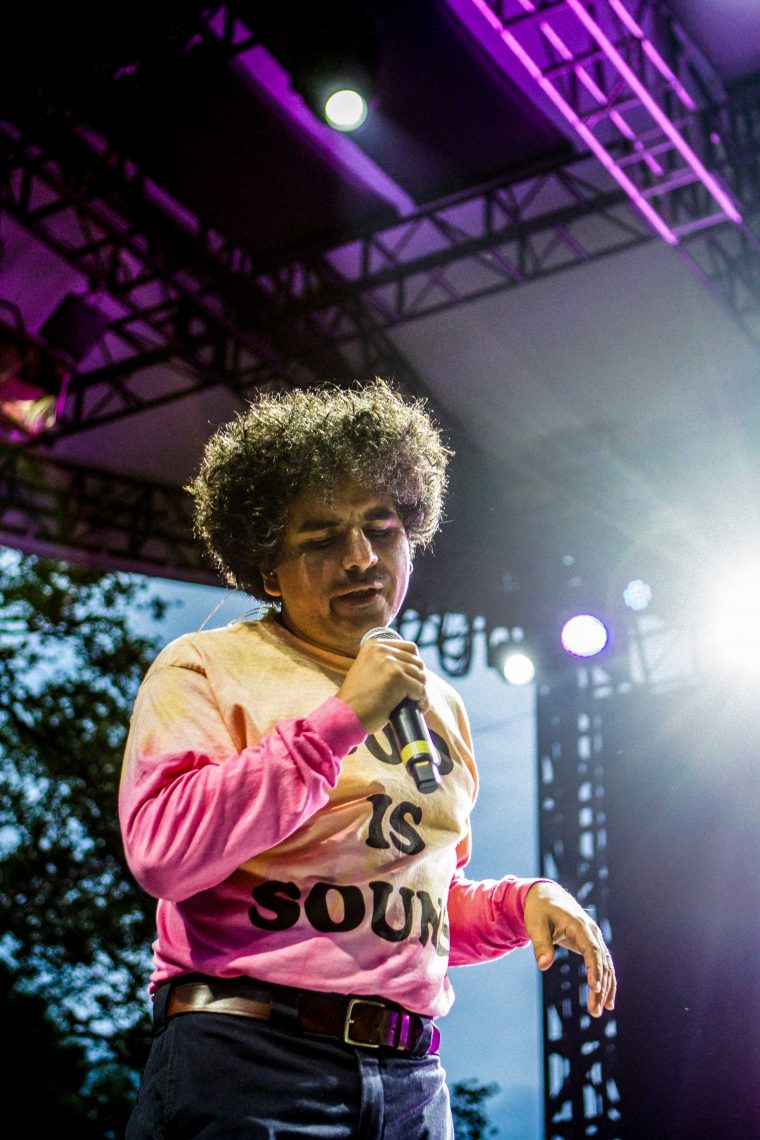 Así que, the making and consumption of (good) music, for those on and off stage respectively, is just as much a necessity as it is a privilege – and now more than ever, we deserve a good thrill. When pondering on the seemingly insignificant nature of working in music or comparable creative fields during times like these, and the possible guilt associated with taking a breath between solution-finding to participate in something like Selena for Sanctuary, actress Villafañe said, “That’s exactly what they want. They want you to be silenced, feel scared, feel small. The whole point of normalizing racism and stereotypes or whatever is to make us all feel… disposable right now. I think it’s up to us to celebrate and elevate our culture.” Her father, she shared, was 16 years old when he came to the states, and “would’ve been in one of those cages.” Sunday night happened to be his birthday, so she rightfully moved earth, sky, and Sunnyside shoot schedules to be here for what ended up being an infectiously joyous, short and sweet rendition of “La Carcacha.”

“It isn’t [always] necessarily about activism,” Helado Negro said. “It’s just asking yourself how are you helping? and if you can answer that for yourself, that’s good. You don’t have to talk to anyone else about it. You don’t have to advertise it. It’s very important to take care of yourself in that respect… don’t feel rushed to know, or share, just do.”

By the penultimate set of the night, I couldn’t quite tell if I was second-hand high or naturally, emotionally overwhelmed. “Our superpower is unity,” Daniel Buezo, co-founder of Kids of Immigrants, uttered sincerely.

Haze and screams welcomed the night’s headliner a few minutes later. “I wanna dedicate these songs to not only everyone who’s here but everyone across the country that’s hurting for our people,” said Colombian-American goddess Kali Uchis. Her vestimenta, a Selena-inspired ensemble by Patrick Church, was a custom-made piece with the words “no human being is illegal,” “no cages,” “no prisons” and “no borders” swirled around saint-like outlines that encircled drawings of the female body. Her honeyed croons added new meaning to the lyrics we’ve heard time and time again. “Everybody’s hurting, everybody’s going through it, but you just can’t give up now cause you gotta save yourself,” she sang from her popular single, “After The Storm.” Como la flor, Uchis let herself blossom in a new light that night, telling followers the following day, “If you ‘no longer wanna be my fan’ because I’m ‘political,’ then toodles!”

Long after everyone on stage left, the crowd lingered behind, chanting, hugging and flooding the merch line before moseying on out (on account of eager security) to find their friends who didn’t make it in.

This is about a moment, but also a movement created by a series of instances like it. Timely and polished, this year’s Selena for Sanctuary was a reminder of the joy it (still) is to be Latinx in America, plus the ultimate thrill that is our music.