On June 9, beloved Bronx rapper Cardi B and reggaeton reina Ivy Queen met for the first time, no doubt triggering a tectonic shift as the Caribbean islands collectively trembled from the significance of such an encounter. Take a deep breath and feast your eyes on the caribeña magic of this moment. We are not worthy:

Both artists performed at Soulfrito Fest, a Miami-born celebration that unites artists from the reggaeton, hip-hop, and dembow worlds. In the post, Cardi says that Ivy Queen’s music “was one of the first reggaeton songs I ever listened to.” As a Trinidadian-Dominican woman from the Bronx, Cardi (aka Belcalis Almanzar, shout out idiosyncratic Dominican names) has never been shy about her love for reggaeton, Spanish-language trap, and dembow. Her social media presence is putting her non-Latino fans and the mainstream hip-hop world onto reggaeton and Latin trap giants. Her recent Latin trap remix of “Bodak Yellow” introduced New York rapper (and longtime friend Messiah) to a whole new audience, and her upcoming collab “La Modelo” with reggaeton romántico poster boy Ozuna is poised to do the same. After Cardi and Ozuna teased the collaboration on Instagram, a fan said he’d “never heard of” Ozuna even though “he has 5 million IG followers.” Cardi defended Ozuna in the comments and explained that he’s the “number 1 Spanish artist in the Latin world.” At the very least, through Instagram, she’s helping bridge the gap between two worlds. 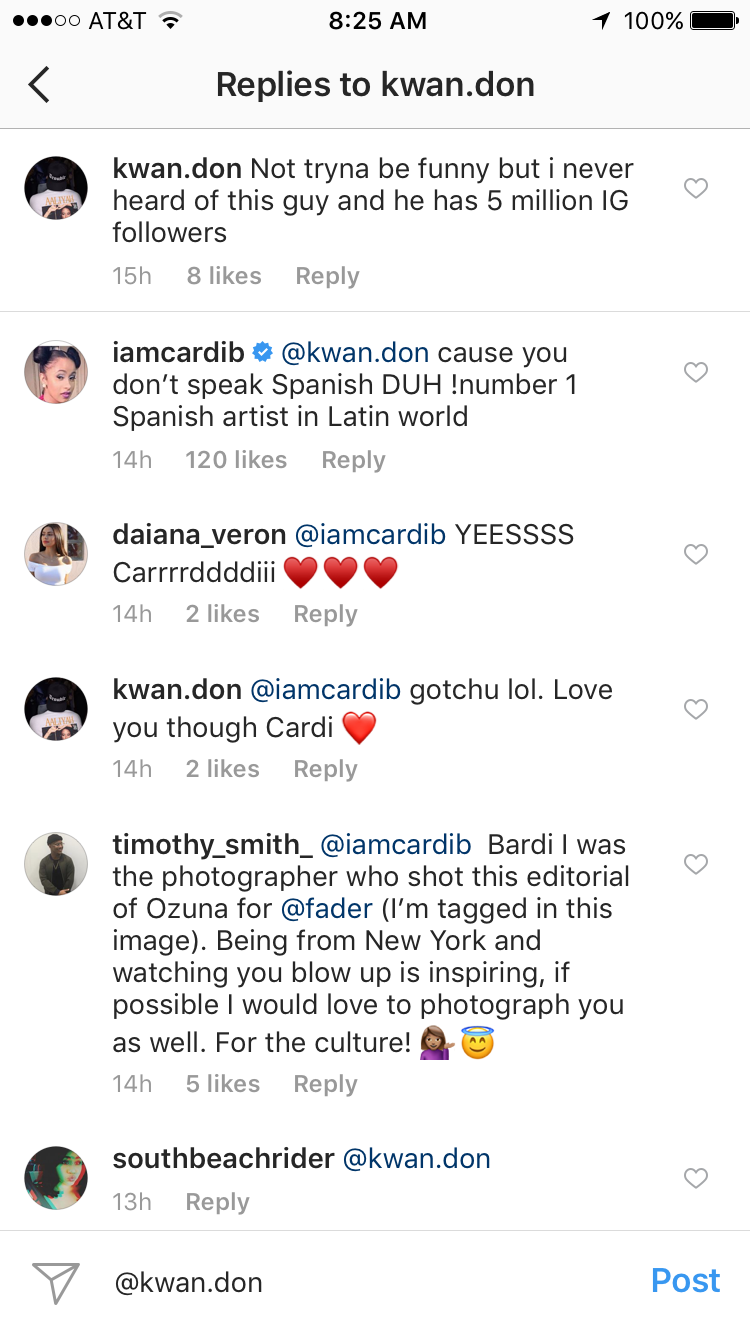 Check the brief history of her longtime celebration of reggaeton and Latin trap below.

Update, 11/7/2017: This post has been updated to include information on Cardi’s upcoming collab with Ozuna and the Latin trap remix of “Bodak Yellow.”

Before her time as Love & Hip-Hop‘s breakout star, Cardi starred in Farruko and Messiah’s “Chapi Chapi” video, the infamous hit that exploded into Uptown clubs in 2015. In the video, Cardi gives a lesson in the art of chapeo (aim high, curve his ass if he won’t drop the cash), with a classic Cardi snicker, no less. It provides a much-needed rejoinder to the misogyny rooted in the term.

We are all Belcalis singing along to La Insuperable’s “Cero Gogas.” GET A BITCH TO TRANSLATE, INDEED.

Like a true fan, Cardi’s got a soft spot for noted sensi reggaetonero De La Ghetto. Sad boys got bops, too.

Who among us hasn’t posted a solo-dolo cover of Ozuna’s “Tu Foto” in a fast food joint? In early May, Cardi said she was on a Spanish-language music kick and posted the first clip of her singing the PR reggaetonero’s megahit on Instagram.

On May 2, Cardi saved us from the caucasity of Cinco de Mayo weekend with a Corona-fueled pregame set to Tali and El Alfa’s “Que Fue” and Lito Kirino, Tali and Sensato’s baboso banger “Que Vivan Lo Tiger.”

I’m calling it: Cardi *might* be a bigger Ozuna stan than me (who can resist those dulcet tones, though?). Here she is in May, singing along to “Tu Foto” once again.

P.S. Raise your hand if you also yodel uncontrollably when you do an El Mayor Clásico impression ??

I rarely condone public FaceTimes, but Cardi geeking out over Bryant Myers, Puerto Rico’s one and only frog-voiced trapero, gets a pass. You do you, Cardi.

Cardi also got the chance to meet trap superstar Bad Bunny during Friday’s Soulfrito show. At this point, I’m just gonna pray for a full BB, Ivy Queen, and Cardi B mixtape so the world can get the Spanish-language Offset ad-libs it deserves.