The great debate on reggaeton is back, though for some it never left. The much-maligned genre is facing renewed criticism for its lyrical content in an Instagram debate that exploded with the genre’s top artists over the weekend.

On Saturday, Mexican singer Aleks Syntek added a new chapter in his crusade against reggaeton by letting everyone know he’s not down for any daytime perreo. Syntek posted an Instagram story criticizing the genre for being “pornographic” after hearing J Balvin and Jowell & Randy’s song “Bonita” on Sunday morning while having breakfast at Mexico City’s Benito Juárez International Airport.

“Please, keep the pornographic club music for the club, not for public spaces at 10 a.m. My children will thank you,” reads the caption on Syntek’s video, pointing out the song’s lyrics: “Se pone caliente cuando escucha este perreo/Y yo también me pongo caliente si la veo.”

In a now-deleted Instagram post, J Balvin replied to Syntek. “You need care, affection, and a lot of love! @syntekoficial as a Latino, please don’t fight, just accept differences. Elevate your conscience [to] what we call tolerance,” wrote the Colombian star after calling on his fans to “send him hugs.” 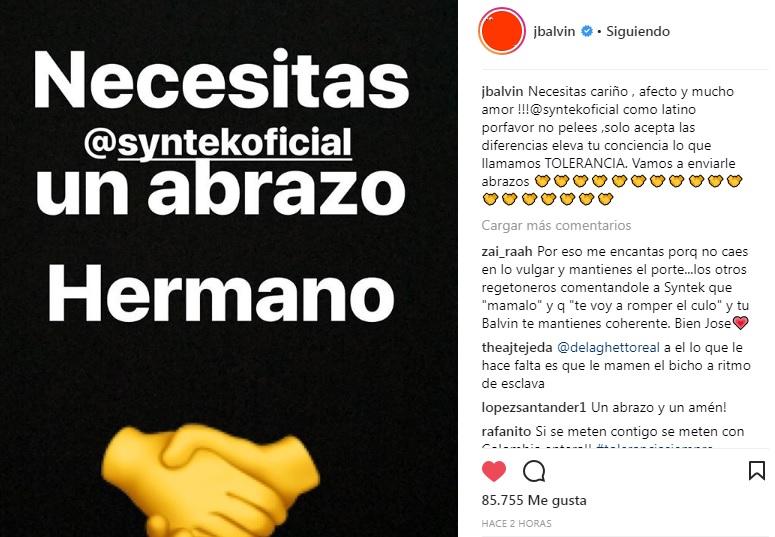 Jowell & Randy’s Joel Muñoz also took on Instagram to comment on Syntek’s complaints. “This is the NEW POP! Whether you like it or not […] I find your music very boring, and I don’t have to attack you because of that,” said the singer, who believes Syntek has personal issues with reggaeton artists.

Syntek previously expressed his concerns about reggaeton in an interview with La Saga in August last year, going as far as saying it “comes from apes” and apologizing after fans pointed out the racist undertones in his comments.

In a lengthy Instagram post, Arcángel, who explained that he is an Aleks Syntek fan, asked the Mexican singer to leave reggaeton alone. “Do you know that through this genre many families live their dream lives?…Most of us come from places where, according to society, we are supposed to be criminals! And we’re not! We bring joy to our fans and our families,” he wrote. The post has since been deleted. 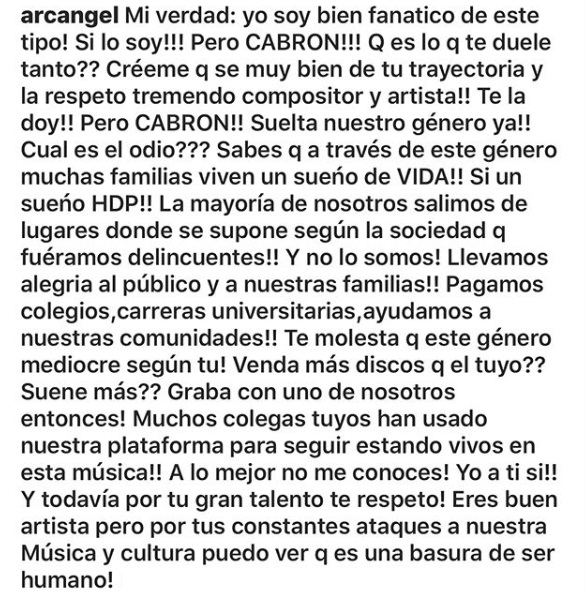 Bad Bunny also joined in the conversation, commenting: “A good parent isn’t someone who forbids their children from listening to today’s music; a good parent is someone who, in spite of the music their child listens to, educates them to grow up and be a good person.”

Syntek responded to the comments on Twitter, saying his main concern is about the “world our children are inheriting.”

As the movement’s lengthy history has shown, reggaeton has often functioned as a scapegoat for social issues, and society has been quick to attribute these problems to the music itself. Many artists and fans – like Arcángel – continue to defend the music as a reflection of social realities in response to such moralizing discourse around reggaeton.

As always, it remains paramount to point out the harm in lyrics that actively promote violence against women (for example, Farruko recently came under fire for a questionable reference to Chris Brown and Rihanna in his feature on Victor Manuelle’s “Amarte Duro”).

If Syntek truly hopes to spark a dialogue on reggaeton artists’ social responsibility, Syntek would do well to consider the complex history and context of this music before making moralizing critiques. Either way, stay tuned, because this surely won’t be the last we hear from Syntek about the topic.