The Cardi B Takeover Continues With a Potential Beyoncé Collaboration
Search
Music 10.24.17 at 12:30 pm

The Cardi B Takeover Continues With a Potential Beyoncé Collaboration

Back in September, la reina Cardi B and Beyoncé caused the Internet to collectively tremble when they met for the first time at Philadelphia’s Made in America Festival (Cardi’s reaction was appropriate: “BITCH I met Beyoncé Bitch !!!!!!!!!!!!” Exclamation. points.).

Today, Bardi Gang and the Bey Hive have reason to celebrate: it looks like Yoncé and Belcalis Almanzar have joined forces for a collaboration, set to appear on Cardi’s upcoming album.

As Rap Up reports, sound engineer Michael Ashby posted a now-deleted Instagram story teasing the collaboration yesterday, which is rumored to be titled “Wet” (personally I’m already digging whatever direction that is going). To add to the intrigue, Ashby captioned the story with a chisme eye emoji and wrote, “Wow this feature is big.” Prepare to hyperventilate, bbs. 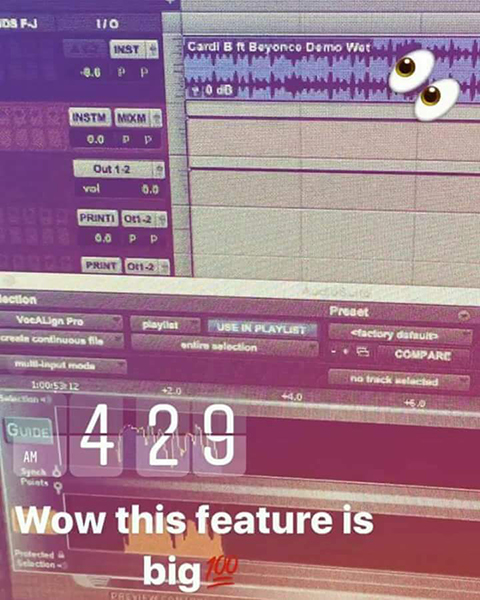 On the heels of nabbing the record for the longest-running no.1 by a solo female rapper, Cardi is putting the finishing touches on her new album, which was originally set to drop this month, but has since been delayed, according to Billboard. Instagram suggests that Ozuna and Offset are also featured on the album, but only time will tell if Cardi’s love for reggaeton and Latin trap actually manifests on the project.

The pressure to follow up on the success of “Bodak Yellow” and ensure the longevity of the era of Cardi B is on, but with a Yoncé feature, the future is bright. Expect this collab to find a place on your “Feelin’ Myself” playlist.