Back in January, beloved Dominican festival Isle of Light announced its 2019 edition was being postponed until next year, interrupting its five-year run. However, although many are sad to wait another year, the party is far from stopping. Mishu Music, the production team behind Isle of Light, is launching a brand new event series this summer called Buena Onda.

Spanning three days in June, August and September at local venue Espacio 401, Buena Onda offers a mid-size alternative for music lovers in Santo Domingo where they can enjoy shows by A-list artists. “Buena Onda aims to fill the void in bringing boots-on-the-ground touring acts looking to open their markets to the Caribbean, and the DR can and should be a sustainable market for these artists,” says Mark Simek, marketing director of Mishu Music.

Buena Onda is kicking off this FridayJune 28th with Boricua rapper Álvaro Díaz and up-and-coming Venezuelan duo Lara Project. Puerto Rico’s Buscabulla, Mexican indie darlings Little Jesus, Miami chillwaver Millionyoung and Dominican band Solo Fernández are scheduled to take the stage on the two following events. “We feel that Latinx artists can be the foundation of the series,” shares Carlos Aybar, CEO of Mishu Music. “We’ll mix other Anglo artists and DJs, and round things up with local talent as well, giving them equal opportunity and exposure.”

Álvaro Díaz himself played Isle of Light 2016, and he remembers his experience very fondly, thanks to its vibe and its location. “I haven’t been able to find another festival as cool [as Isle of Light], in front of the beach,” he remembers. “Every time people ask me about the best festivals where I’ve played, I always try to share my experience in the [Dominican] Republic with Isle of Light.” His participation also unlocked one of his dreams. “I had always been the biggest Complex fan in history, and the first thing they wrote about me was thanks to that festival.”

Organizers are optimistic about the success of Buena Onda, and are already planning what it will look like next year, aiming to make the event series a permanent fixture. Aybar says, “More artists will want to route their tours through Santo Domingo if they see it as a viable stop, so there should be no shortage of talent to bring if the audience supports the artists.”

Isle of Light has showcased an outstanding list of local and international artists in the DR since its launch, including Bad Bunny, Rita Indiana, Bomba Estéreo, Twin Shadow, Neon Indian and more. But with time running short for this year’s edition, postponing the festival was a hard decision, but a necessary one. Now, not only do Dominican audiences get to have a series like Buena Onda as an option, but they’re also in for a treat for next year’s festival. “For now we can say that we’re building a world-class, balanced artist lineup and working through logistical improvements that will take the festival to new heights,” reveals Simek. “Our fans and followers are what drive and inspire us and we can’t wait to show you what we have in store for 2020.”

Buena Onda is taking place this summer. See the full program below. 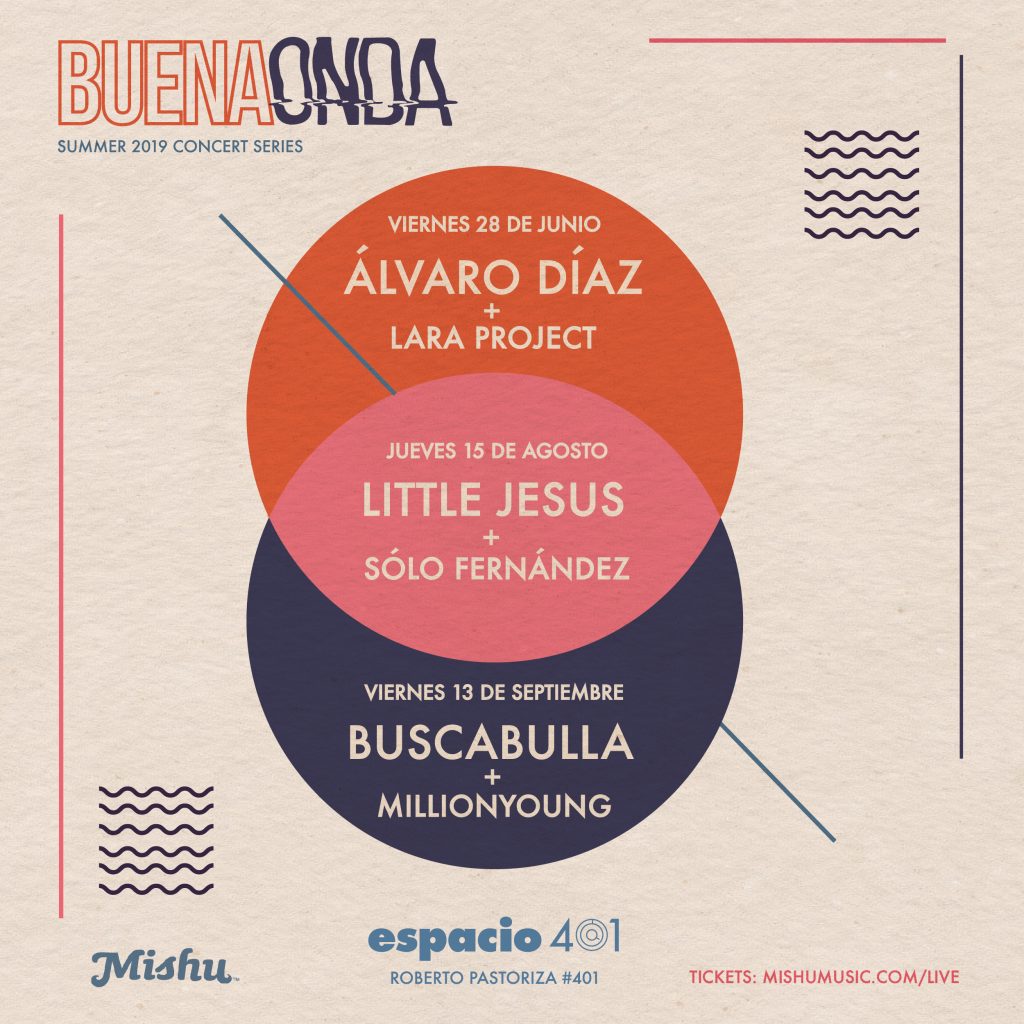 Enter for a chance to win a pair of tickets to see Álvaro Díaz and Lara Project at BuenaOnda courtesy of #NuevoNoise.