The RBD world tour has officially been confirmed! On Thursday (Jan. 19), the Mexican pop group announced the dates for the Soy Rebelde Tour 2023 that will visit the U.S., Mexico, and Brazil. The group went live on the band’s TikTok account to share a video that announced their highly-anticipated world tour. Anahí, Dulce María, Christian Chavez, Maite Perroni, and Christopher von Uckermann will reunite for the tour as RBD, bringing together most of the former band except Alfonso “Poncho” Herrera.

Perroni talked with Billboard about joining her old bandmates for a new tour. She revealed the RBD karaoke session at her wedding last October inspired them to get back together.

“It was an incredible moment,” Perroni said. “A few days later, we started a group chat, and all agreed it was time to have that reunion tour. We planned it all in a month and a half, and here we are. It’s a new era that makes us really excited, and it’s a new opportunity to share the stage once again and feel a unique energy.” 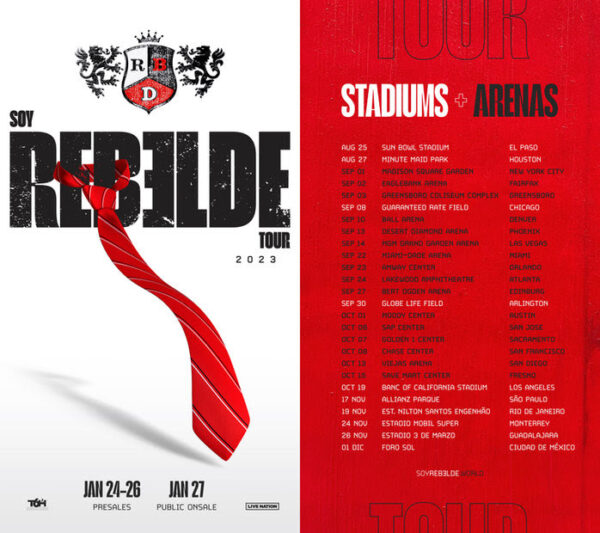 RBD is set to perform 26 shows, kicking off on Aug. 25 in El Paso at the Sun Bowl stadium near the U.S. and Mexican border. The Soy Rebelde Tour 2023 will visit 21 cities in the U.S., including New York, L.A., Miami, Chicago, and Houston. It will end with a homecoming show for the band in Mexico City on Dec. 1. Perroni also revealed how she is preparing for the tour with her pregnancy that she announced earlier this month.

“I’m preparing myself physically and mentally for this new stage in my life, which will be challenging but a great opportunity as well,” she said. “My friends, Dulce and Anahí, who already have experience in motherhood, will be there to guide me and give me tips. It will be a very special year for all of us.”