Bad Bunny has a penchant for wacky wardrobe choices, and it’s part of the reason the Puerto Rican rapper has become the poster boy of the Latin trap movement. Whether it’s his impressive graphics or love of bold prints, the Boricua rapper continues to turn heads for his wild sense of fashion.

But El Conejo Malo’s eccentric sense of style isn’t sitting well with everyone. For some time now, the “I Like It” star has been sporting colorful manicures. All the way back in summer of 2017, he rocked yellow nail polish at Premios Juventud, and more recently, painted his own nails in the “Estamos Bien” video. Though plenty of male pop stars and entertainers have painted their nails in years past, the choice has drawn the ire of plenty of fans, who have leveled homophobic insults at Bad Bunny and questioned his sexuality. Now Benito Martinez Ocasio is facing criticism again, after he attempted to get his nails done at a salon but was turned away.

While on tour in Europe, Bad Bunny went to the Ana Rodera salon in Oviedo, Spain to get his nails done, but was refused service. On Monday, he recounted the incident on Twitter in Spanish. “I just wanted to tell you all that I went to this shitty place to get my nails done (manicure + color) and they told me NO because I’m a MAN hahaha. I don’t know what to think, but it seems very very very unfortunate haha. What year is it? Fucking 1960? What do you call this?” 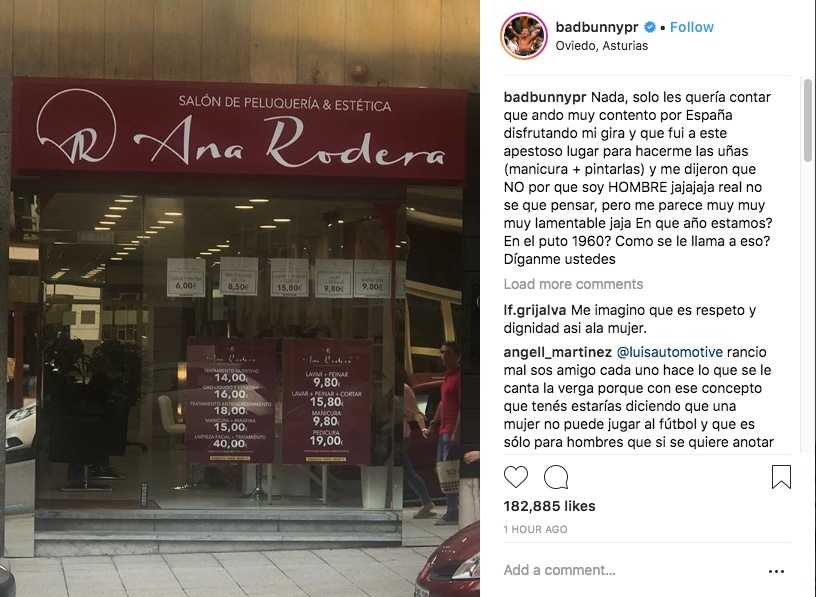 Though most fans were quick to applaud El Conejo Malo’s criticism of the business, one follower was unhappy with his response to the homophobic attacks, pointing out the sexism in his remarks. “Dude, when they asked you if you’re gay because of your nails you responded, ‘Whoever has doubts about my sexuality should bring their wives to my house; they’ll see how I will make them raise my kids.’ What year are you in? In fucking 1960?”

El Conejo Malo replied to the fan on Twitter, attempting to clarify his statement and admit that part of his response was wrong. “I was saying that I’d have sex with their wives, get them pregnant (which is wrong) and the men would raise my kids,” he wrote, adding, “It was only a nice and exaggerated way of saying, no, I’m not gay and I love women. That’s all.”

While some fans have celebrated Bad Bunny’s body positivity, others point out that El Conejo Malo still harbors sexist and objectifying views of women.

See the tweets below: 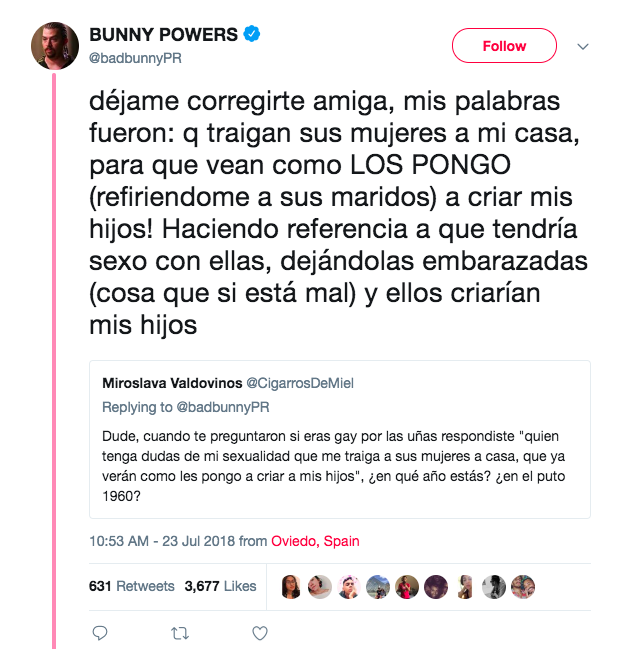