La Murga de Austin isn’t just about music, it’s about people. Ahead of Austin FC’s first-ever playoff match, Remezcla had a chance to talk to one of its original members, trumpet player Mateo Clarke, about what La Murga de Austin really is, how it originated, and the community they have created around a game that is very much a part of our communities’ foundational identity, like futbol.

The first thing that Clarke told us was that La Murga de Austin, an all-volunteer, Latin America-style brass band, originated around a group of people’s desire for community, and of course, a love of futbol — which, in our communities, is no casual thing. So, for Clarke, when it was announced that Austin was getting its own MLS team, it was time to plan. “A couple of us at the beginning were like, okay, what is this gonna look like?” or, “Who are we gonna take inspiration from?”

Considering how much futbol is loved globally and how many different traditions there are, that was a valid question. But very soon, the idea started taking shape. “We had people in our group that were from Mexico,” and they “had an idea growing up of the brass and the drums and the supporter section, and having songs.” But there were also “some people that had more of an expectation of what you have in Europe or especially in the UK, where it’s more reactive to what’s happening on the field.”

This led to a debate about what this support group would look like, one that was resolved by leaning into the tradition of marching bands in Texas — particularly as this idea is also something seen in futbol around Latin America, not just in Mexico, but in Argentina and Colombia too, among others. Plus, they had luck — or perhaps, just destiny on their side.

It’s being a part of something that represents positivity, represents, you know, la raza, la gente, and just being a positive part of the culture.

“In Austin, there’s this group called the Austin Samba School, and they call themselves the largest Brazilian cultural group outside of Brazil.” So, early on, Clarke and others contacted them to ask for advice. The idea was to do something that was recognizable to Texas traditions, but with a “distinct and unapologetic Latin flavor to it.”

“We knew that would resonate with the people in Austin who grew up watching soccer.” But they also knew it would resonate with people who were more familiar with European soccer than Latin American leagues, too. “They would see it, and they would think of the global soccer powers in Brazil and in Argentina,” so even though it wasn’t what they were used to, it would feel like a natural part of cheering for your futbol team.

The idea, however, was always for La Murga de Austin to be about more, and that’s what it ended up being. “It’s being a part of something that represents positivity, represents, you know, la raza, la gente, and just being a positive part of the culture.” Well, that and bringing together a community of fans that, as Clarke remarked, has always been kind of fragmented.

“It’s always been people have their team and they go to their bar with their dozen friends,” nothing more. “The soccer community was always kinda decentralized.” Things have changed, though. “Now with Austin FC, it’s kind of given everyone the same color to wear.” People can still follow different leagues and national teams, but they have one thing in common to call their own.

And though the biggest futbol tournament coming up is the World Cup, which only involves national teams, Clarke and La Murga de Austin members in general, are excited because they are, above all things, futbol fans. “I’ve always loved how soccer is so international,” he shared. “People can represent their nationality in a way that’s not overly patriotic.” And though the country flags will be everywhere, for Clarke, the best part is getting to experience the “different flavors of support.”

Particularly as La Murga de Austin has members from Colombia, Panama, Mexico, and even Europe. This means a lot of watch parties, rooting for each other’s teams, and, of course, some rivalries. Just the futbol way.

“For us, soccer is kind of the lowest common denominator. It’s a way to start talking with somebody, have a conversation. And then from there, it grows into a friendship,” which is something La Murga de Austin really wants to foster and support, just people having fun with futbol, creating communal spaces, and making connections. And since futbol is truly a year-round sport, the community never has to stop. Everyone can experience it in their own way and in their own time. It’s always there, waiting for you.

And though this is not the reason why La Murga de Austin was created, Clarke admits that the idea of shaping soccer culture in a way, and passing what they’ve created to a new generation, is indeed an inspiration. “The whole metaphor is …our logo for Austin FC is a tree.” Except it’s not, it’s actually two. “The whole idea is based on a real tree in Austin that got poisoned. And in order to save it, they had to plant a sapling from the tree next to it. So there’s like a young tree and an old tree that kind of have this symbiotic relationship and are dependent on each other. So we definitely think about things intergenerationally.”

La Murga de Austin is more than just a group of individuals of the same age, instead, there are fathers and sons, mothers and daughters, younger members, and older ones. “Music and soccer are these cultural things that we have that go beyond age and go beyond any kind of language. And so the whole goal is to create a welcoming home for people to just be involved and be a part of something bigger than themselves.” 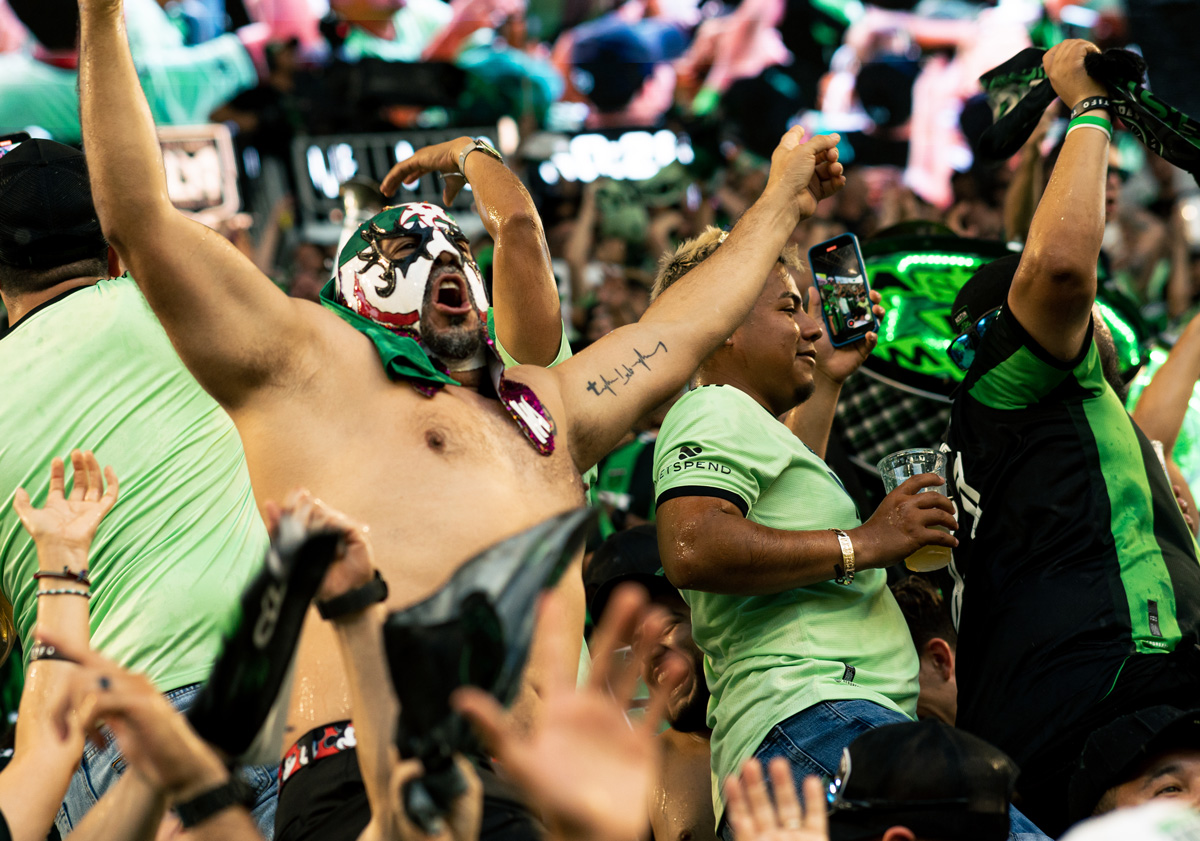 But it doesn’t stop there, because Clarke was also clear that a thing like La Murga de Austin really wants to do is “challenge soccer culture,” especially the violent part of it. “We want to represent the positivity. We want to be proud of Austin, travel in big numbers and be good guests in the cities we go to.” Indeed, all La Murga de Austin wants is to “have fun, sing songs, enjoy the soccer, and create a place where people have a sense of belonging.”

Futbol and community, hand in hand. La Murga de Austin has surely found a way to make an already fun game even better.